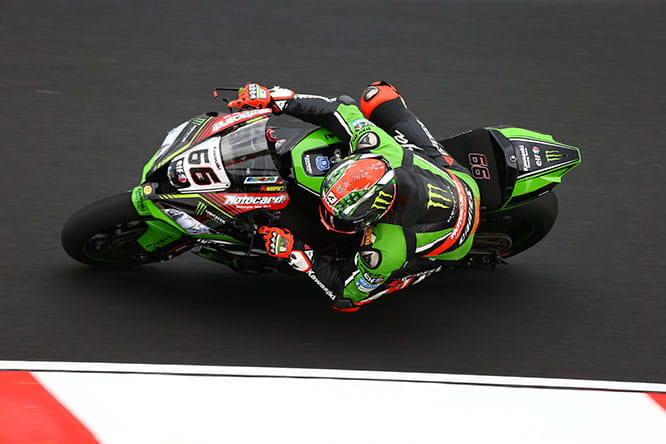 In truth it was a dull and rather static 16 lap race, with only a few battles in the mid pack providing any kind of intrigue.

Starting from second, former British Superbike champion Alex Lowes led briefly on the new-for-2016 PATA Yamaha, but he soon slipped back with the YZF-R1 unable to match the pace of the front runners. He would slip back as low as ninth mid-race, but recovered to take the flag in a season’s best fifth.

Althea BMW’s Markus Reitenberger gave the best performance of his short world superbike career. The 22-year-old German romped through to fourth place, only for his S 1000 RR to stop with five laps to go. His Spanish team-mate Jordi Torres went on to take the fourth place, with Davide Giuliano sixth on the second Aruba.it Ducati and Honda teamsters Michael van der Mark and Nicky Hayden in seventh and eighth. Veteran Australian Ant West came home ninth on his class debut, with Brit Leon Camier rounding out the top 10 on the MV Agusta. Reigning British champion Josh Brookes was 11th on his Milwaukee BMW.

Speaking after the race, pole man Sykes said: “It’s a really nice feeling. I’ve been on the back foot since the technical rules changed last year but I think we are getting close. A lot of people have criticised me but when the bike is like that and I am able to do my own thing, it is such a nice feeling. It certainly wasn’t easy. I had to dig hard because these guys are so fast but it feels good and there are still some things we can improve for tomorrow.”

With his 100% podium record, Rea extends his championship lead to 39 points over Davies, with Sykes a further 23 back in third.