Sykes does the Donington double 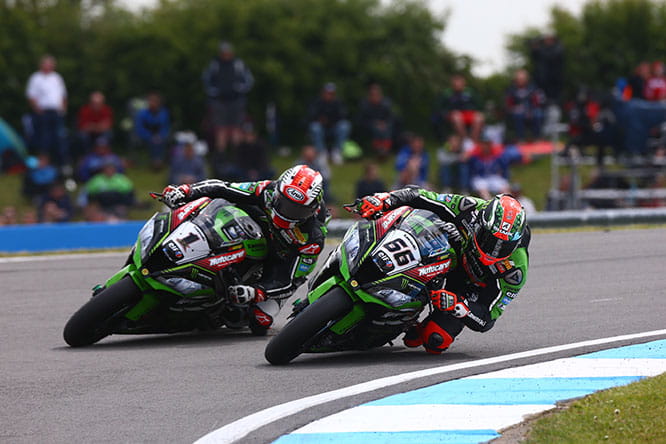 Tom Sykes extended his winning run at Donington Park to four years and eight races after taking the double in this weekend’s British round of the Superbike World Championship.

In truth, none of the racing proved particularly memorable at the Leicestershire circuit, but behind the scenes there were plenty of interesting sub plots, with Sykes bossing the race despite a mysterious set-up problem with his Kawasaki ZX-10R that he suggested blunted his performance.

Team-mate Jonathan Rea, who had been third yesterday after gearbox problems, pushed Sykes for 21 of the race’s 23 laps but had to settle for second best as he suffered with arm pump in the closing stages. He finished two seconds behind Sykes, with third placed Chaz Davies salvaging 16 points from a miserable weekend on his Ducati.

Speaking after the race, Sykes was typically guarded with his words but confirmed that he had some technical problems with his bike. “I need to speak to the team,” he said, “There was something strange with the bike but overall I am over the moon to come away from here with 50 points. From that aspect, it’s been the perfect weekend and I’m also happy that in the last few races we have made some changes to the bike which is allowing me to ride a bit better. I think that Jonathan had a better set-up than me and was able to ride a more consistent race than me, but in the last two laps I was able to do what I should have done all race.”

Rea, who had briefly led the race after overtaking his team-mate into the Melbourne hairpin mid race, only to run wide as a result of the gearbox problem that wrecked his Saturday race. He said: “I thought I could win but Tom beat me and did a great job. I had arm pump with five laps to go. I didn’t have feeling and that was the limiting factor. My bike was better (than Tom’s) in some areas and I was happy to follow, and wait until the end. Unfortunately when I wanted to punch I couldn’t and that was because of me and the arm pump.”

For Davies, third proved damage limitation on a miserable weekend that saw his bike destroyed after catching fire during Friday’s practice, before two crashes saw him score no points in Saturday’s race. He said: “We definitely suffered through missing the track time (as a result of Friday’s fire) although whether we could have mixed it with the Kawasakis or not, we don’t know.”

With Alex Lowes out through injury, Leon Camier was the final Brit at Donington Park. Riding the sole MV Agusta, the former British champion was again mightily impressive on the unfancied machine, following up his fourth place yesterday with a fifth place today. He said: “I got a bad start and couldn’t get past Giuliano but once I found my rhythm I was able to work my way through. I couldn’t catch Lorenzo Savadori (in fourth) but made a tough pass on Nicky Hayden to take the fifth, so I am happy.”

In the championship, Rea maintained his 100% podium record, although his run of six races without a win is his biggest drought since joining Kawasaki at the start of last season. He continues to lead the championship, on 293 points, with Sykes moving into second place, 56 points adrift, with Davies a further six points behind.

The next round takes place in Misano, in three weeks’ time.