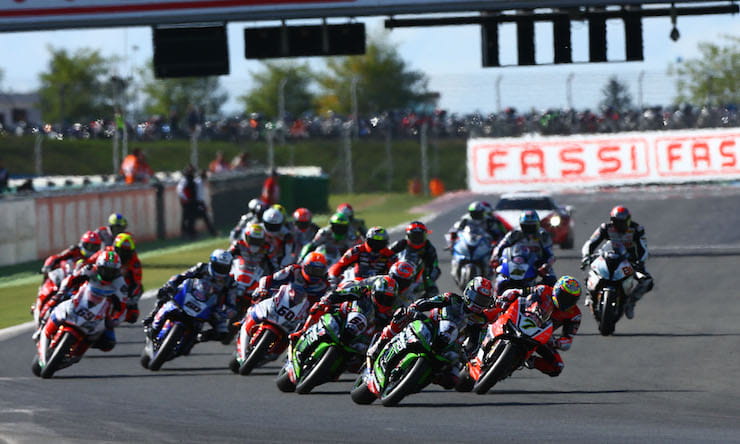 World superbikes will get a shot in the arm in 2017 after organisers announced a new reverse grid format to spice up the action in the ailing class.

While grids for Saturday’s opening race will continue to be determined by the existing 15 minute superpole session, the riders will line up for Sunday’s race based upon the position in which they finish Saturday’s race.

What it means is that the winner of Saturday’s race will line up ninth, with second place starting eighth and third in seventh. The second row will consist of the riders who finish the race in seventh, eighth and ninth, while the fourth placed finisher will start the Sunday race in pole, where he will line up alongside the fifth and sixth place finishers. The rest of the grid will be based upon the superpole qualifying session meaning that, for example, if the pole sitter from race one doesn’t finish, he’ll start in 10th, with 11th being the next fastest qualifier in superpole who didn’t finish in the top nine.

Still with us? It sounds quite complicated but it should all make sense when the new season starts in Australia in February. Reverse grids are nothing new and are fairly common in motorsports that feature multiple races over a weekend. The British Touring Car Championship uses a random draw to determine the starting positions of the top 10 in the second and third races of the weekend, while British superbikes currently employs a non-handicapping system that determines starting places by the riders’ fastest laps in the first race.

The new rules were announced following a meeting of the FIM Superbike Commission in Madrid last week. Other small changes to come out of the meeting include the adoption of flag-to-flag races in the supporting Supersport World Championship, meaning that riders will have to come in to change tyres in the event of mid-race weather changes, while riders will be unable to lap the track on scooters to learn the track prior to the race meeting. This is in line with the MotoGP regulations and came about after two Moto3 riders crashed while lapping Sepang on mopeds.

Other changes to world superbikes next year include a new ‘Supersport 300’ class that is open to youngsters riding KTM RC 390s, Kawasaki Ninja 300s, Yamaha YZF-R3s and Honda CBR500Rs. There are also suggestions that the current world supersport class could be replaced by a series for 1000cc naked bikes within the next few years, to reflect the bikes that are being sold in the marketplace.