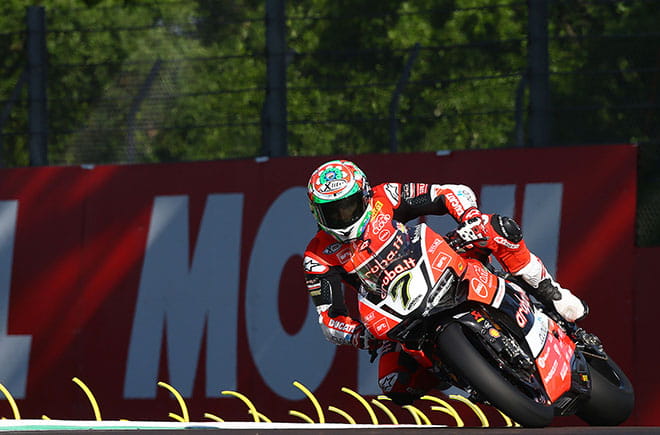 After taking pole in the morning’s superpole session, Davies was never headed in the 18 lap race although Rea, who has taken a double win at Imola in the last two seasons, pushed hard in the opening laps.

Rea’s challenge was dampened when he ran wide at turn seven around half distance, leaving him to fend off team-mate Tom Sykes, who found himself on the back foot after losing track time after technical problems in yesterday’s practice sessions. The Yorkshireman was able to close his team-mate down in the closing stages but was unable to make a pass at the tough Italian circuit.

Leon Camier put in a sterling ride on the improving MV Agusta to finish sixth, running as high as fifth for a period, but Yamaha’s disappointing season continued with Alex Lowes a disappointing 11th, with his partner Sylvian Guintoli missing out after breaking an ankle in a ferocious highside in the morning superpole session.

British champion Josh Brookes’ torrid season on the Milwaukee BMW continued as he crossed the line a lowly 14th.

“This is Ducati’s back garden so it’s extra special to win here,” said an elated Davies. “Johnny is always a fast starter so I wasn’t expecting to lead into the first corner. I made a good start, put in some good lap times and got my head down, because I wasn’t sure how it was going to play out. I don’t know what tyres the other guys ran, so I didn’t know if they had something harder than me or the same. I didn’t know how the bike would feel towards the end of the race but I think we were as good as, or even a little better than, the other guys.”

Rea claimed that a recurring bike problem had caused him to run wide, adding: “It was the same problem that we had in Aragon and Thailand. The rear locked a lot in the race. In the beginning I felt good and although Chaz got a big gap on the first lap I was able to keep it stable until I made the mistake. That was all it took and after it happened two or three times my confidence dropped off. Tomorrow is another day though and we need to dig deep to see what happened.”

Speaking afterwards, Sykes added: “It’s a track that doesn’t leave much margin for error and it would have been difficult to make a clean pass (on Jonathan). Overall, considering the amount of track time we lost yesterday, we’re not at a bad level.”

Tomorrow sees the second superbike race, as well as the supersport outing – for which France’s Jules Cluzel will start on pole position.