Chaz Davies to remain with Ducati in 2016 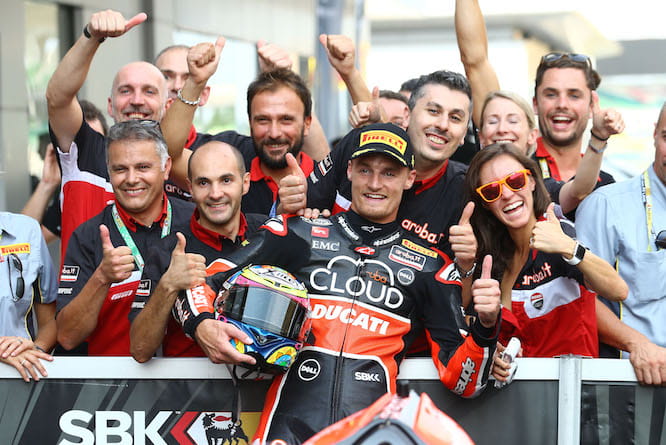 Chaz Davies and Davide Giugliano will remain with the Aruba.it Ducati Racing squad in the Superbike World Championship for the 2016 season.

Davies currently lies second in the championship after a good run of mid-season form. The Welshman has only been off the podium twice since Donington Park in May and has won three out of the last four races.

2016 will mark his third season with the official Ducati team in World Superbikes.

“I’m very happy to have put pen to paper for another year with Ducati and the Aruba.it Racing - Ducati Superbike Team,” said Davies, as the deal was announced in Jerez.

“This year we’ve made progress race after race, obtaining some very strong results especially in recent months. I believe it is important - for  me, the team and for Ducati - to keep that continuity and I consider this a really good opportunity because I am confident about the development and improvement in performance. Together with Ducati and the team, we’ve continued to move in the right direction right from the start, but we can do more and I’m convinced that next year the bike will allow me to be even faster. The contract renewal is great payback for my work and I hope to be able to reward the team and Ducati with great results in 2016.”

The Bologna factory will continue with an un-changed line-up for the third year running with Davide Giugliano also continuing with the team for 2016. The Italian rider has been blighted with a number of injuries this season and was ruled out of the remaining rounds with broken vertebrae earlier this year.

The World Superbike Championship resumes in Jerez this weekend.