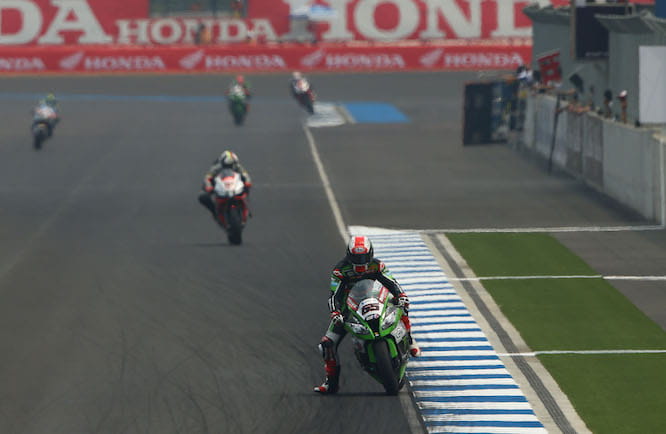 Jonathan Rea stormed to double victory in the inaugural Thai World Superbike round, leading from lights to flag in both of the days outings. Leon Haslam took the runner up spot twice, with Tom Sykes and Alex Lowes completing two all-British podiums.

Jonathan Rea made a strong start to take the lead from pole position ahead of Leon Haslam but the second Kawasaki of Tom Sykes slipped past the Aprilia man within a few corners.

Looking good from the off, Rea began to build a comfortable gap in the first two laps with a close battle forming behind between Sykes, Haslam and Davies, with Lowes and Torres not far off.

Haslam moved into second on the third lap and having been able to match Rea’s pace in qualifying, the Derbyshireman started to close the gap to the lead.

The handbags came out between Alex Lowes and Tom Sykes on lap seven, the Suzuki man barging through on the 2013 World Champion to take third spot.

Closing on Sykes for fourth, Chaz Davies slipped off the Ducati Panigale R on the tenth lap. The Welshman remounted and re-joined the race in fifteenth place.

After an impressive first half of the race, Lowes dropped the Suzuki at the final turn on lap thirteen to lose third position before rejoining in ninth.

Second-placed Haslam started to drop off the pace with four laps to go with Jonathan Rea almost five seconds up the road.

Having not put a single foot wrong, Jonathan Rea cruised to his second win of the season ahead of Haslam with Tom Sykes just managing to keep hold of third place ahead of a charging Jordi Torres.

World Champion Sylvain Guintoli finished fifth on the PATA Honda ahead of a strong recovery from Lowes in sixth. Matteo Biaocco got the better of Ducati rival Troy Bayliss with David Salom and Leandro Mercado rounding out the top ten. After falling half way through the race, Chaz Davies recovered to eleventh. 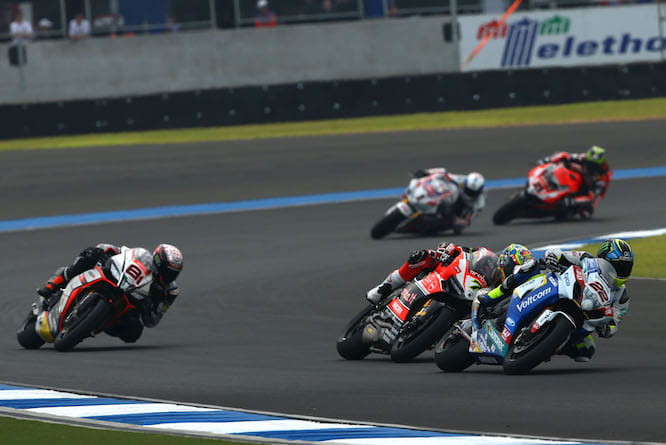 The second race’s drama started before the green lights went out, with Guintoli forced to start from the back of the grid after a late pit exit. Once again, Rea got a rocket start ahead of Leon Haslam but a hard move from Alex Lowes put the Derbyshireman out of his seat early on the first lap.

It wasn’t a good day for Ducati’s Chaz Davies as he fell once again in the second race on lap five. Again, the Welshman was able to rejoin but much further down the pack.

Haslam passed Lowes for second place on the ninth lap and began to look at closing down Rea’s two-second lead.

Tom Sykes’ lost out on third place to the second Aprilia of Jordi Torres with one lap to go, the Aprilia using its superior power to pass Sykes’ ZX10R on the straight.

Rea’s lead proved insurmountable for Haslam, who was forced to settle for second place with Alex Lowes bringing it home third for Suzuki.

Torres maintained fourth ahead of Sykes, with van der Mark crossing the line ahead of teammate Sylvain Guintoli only to be docked one position for an illegal overtake on the final corner.