Carlos Checa back on track with Aruba.it Ducati 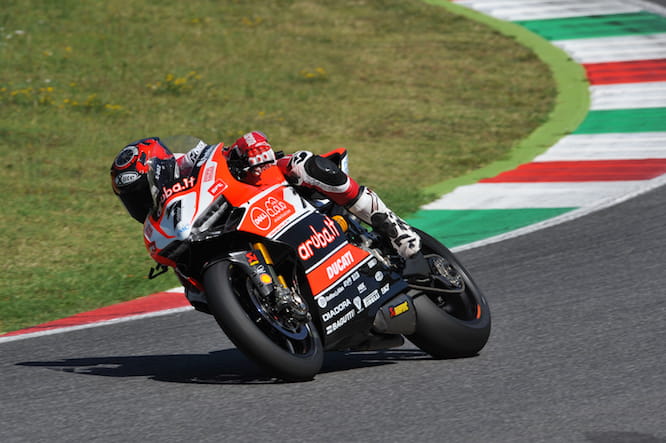 Carlos Checa returned to the track this week for a one-off test with the Aruba.it Ducati Superbike Team at Mugello.

The 2011 World Champion stood in for Ducati test rider Luca Scassa, who broke his collarbone when wildcarding in the World Superbike round at Misano last weekend.

The Spaniard completed more than 150 laps over the three days, achieving what Ducati have called ‘impressive’ lap times. Of course, those times haven’t been released but Checa himself was also impressed with his own pace.

“I was pleased to be fast right away”, said the 42-year-old. “It was really emotional to work with those people who helped me achieve my past results. I hope that my work over these three days has helped the team further improve the bike, which has really grown a lot recently.”

This test marked the first time he’d ridden a superbike since retiring at the end of the 2013 season, and while he says he’d love to test again he also stresses that this isn’t a prelude to a racing return.

“I want to stress that I’m not thinking to return to racing”, he said. “I just liked the idea of experiencing some of the excitement that I enjoyed during my career.”

Checa’s testing return comes just weeks after Max Biaggi, one of the Spaniard’s main rivals in both Grand Prix and World Superbike racing, made a comeback at the Misano round of the Superbike World Championship.