Davies wins in Malaysia, Rea forced to wait for title 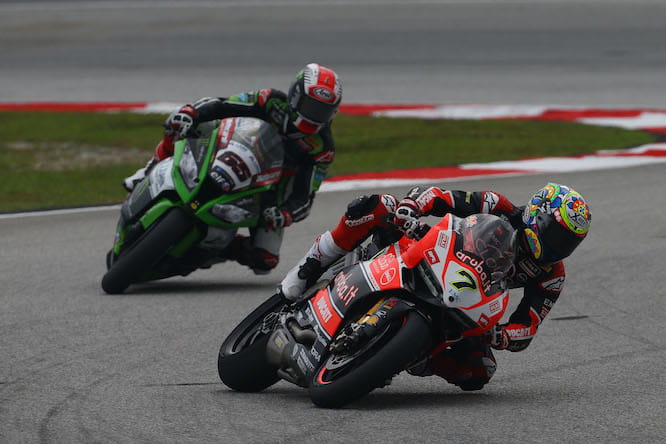 Chaz Davies prevented Jonathan Rea from taking the World Superbike crown in Malaysia after a coming together at the final corner in the second of today's two races.

Having beaten Davies by a last lap pass in the first race, Rea attempted a repeat manoeuvre on the Welshman at the end of race two, but the pair came together and it was Davies who got the drive on exit to take the win.

Tom Sykes endured a disastrous weekend, dropping back to fifth in race one after leading by up to three seconds before an incident at the first corner of race two with Max Biaggi left him down in 16th place. The Yorkshireman fought up to seventh before dramatically crashing out – giving Rea a shot at claiming the title.

However, Sykes’ misfortune saw Davies elevated into second in the standings and the Welshman’s victory meant Rea was six points off the magic 150 points he needed to be crowned with three rounds in hand. 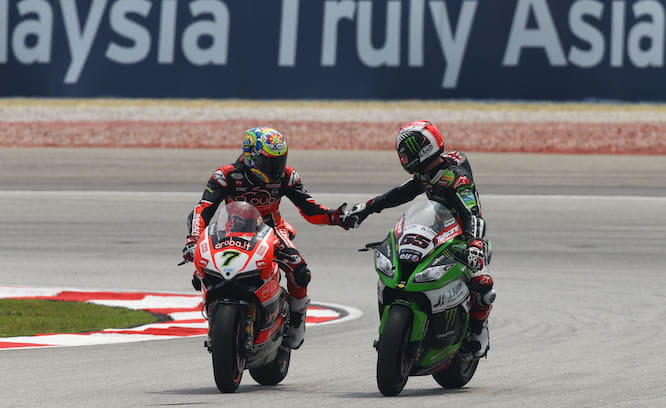 Max Biaggi enjoyed a return to the World Superbike podium for the first time since his retirement in 2012. The Italian benefitted from Tom Sykes’ tyre troubles in race one to move into third in the closing stages. His luck ran out in race two, however, retiring after the first corner incident with Sykes.

Aprilia doubled up on podiums in race two with Jordi Torres finishing on the box; the Spaniard had dropped to tenth in the first race.

Rea now leads the championship by 144 points over Davies, meaning he is almost certain to take the title in Jerez next month.