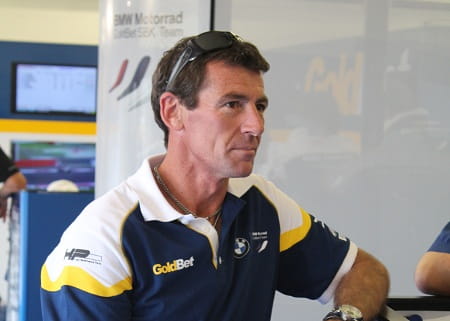 Troy Corser’s World Superbike team, JR Racing BMW, will not take part in the opening round of the 2015 season at Phillip Island next month.

The news comes after many a rumour that the team, owned by a businesswoman from the Dominican Republic, is on the verge of collapse and may not make the grid at all as a result of financial issues.

Corser, who heads up the team as Sporting Director, signed Ayrton Badovini and Toni Elias for the season ahead but neither has yet tested the BMW S1000RR they are set to ride, with the team also forced to miss the final European pre-season test in Jerez.

The team claim their financial problems are nothing to do with funding (or the lack thereof) but rather an issue with transferring the cash from the Caribbean country to Europe. Confident this situation will soon be resolved; Team Owner ‘Chary’ Robinson has said that JR Racing BMW will make their World Superbike debut at the second round in Thailand at the end of March after a series of private tests.

“The delay is simply related to the difference between [the] home [of the] team, Bank residence and source of funds,” explained Robinson. “Regulations on international transfers of large amounts require steps to be fulfilled and can have long delays. We prefer to do things right from the start and organise everything correctly, even if it means to miss the Australian event due to logistics, because you have to send the bikes well in advance.

“If the first race on European soil had been we would not have any problem, because we must not move the bikes so early. As every cloud has a silver lining, we will use the time to perform the necessary tests until the second race in Thailand. Dorna and our drivers support us in this decision, which we will debut in the World Superbike with all the guarantees.”

Despite this assurance, some paddock insiders still have doubts about whether the team will make the grid. Only time will tell…