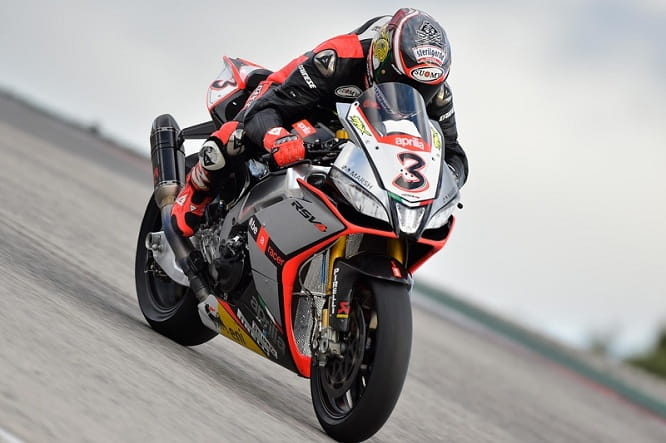 Biaggi retired after winning his second production world title with Aprilia at the end of 2012 but has since retained a strong relationship with the Noale factory through testing duties.

Each time the former 500GP race winner tests, rumours emerge about a possible return to competitive action. Speaking to German website, Speedweek.de in Jerez, Aprilia’s World Superbike boss Dario Raimondi refused to rule out the possibility of a Biaggi return.

"He is keen. To organize a wildcard application is for a team but very difficult, you need the bike and personnel to do so,” he explained. “We want to do with Max, we are working on this idea. In the Superbike World Championship, he would still be competitive, for sure.”

When asked whether this meant Biaggi could make a comeback as a wildcard at some point this season and where, Raimondi replied: “Yes, this is possible but nothing is decided. We still need to clarify some things.

“[The wildcard would be at a race] in Italy. Imola beginning of May is too early; also this is not really a good track. Misano end of June is possible.”

Biaggi tested what looked to be an Aprilia RSV4 at a private Portimao WSBK test last week but sources at the circuit suggest it wasn’t what it appeared. It is believed the bike he was riding at the very least featured MotoGP-spec electronics, if not a Grand Prix engine as well. The Italian was some two seconds off Leon Haslam’s fastest time.