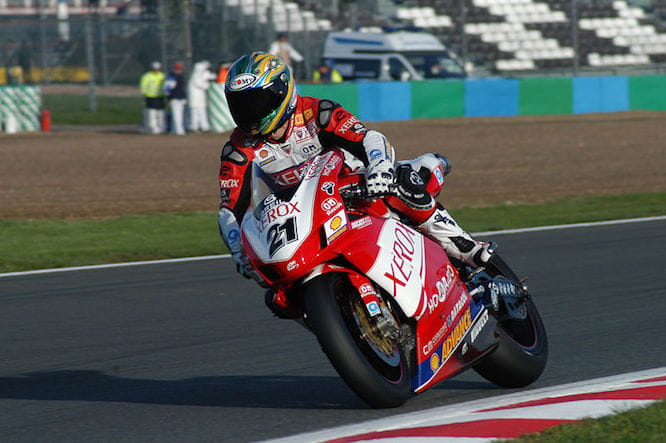 Bayliss retired from competitive action as World Champion at the end of the 2008 season and despite many a wildcard rumour, nothing came to fruition.

Now, with Ducati in need of a last minute replacement for Davide Giugliano, who fractured two vertebrae in a testing crash on Monday, Bayliss will make his return for the squad that took him to all three world titles.

“I really feel for Davide and that it’s a real shame for his season to be starting in this way,” said Bayliss. “The desire to be able to return to the track and see the home crowd and the Ducatisti has always been strong, ever since I last raced and then also Phillip Island, one of my favourite tracks, is celebrating its 25th anniversary of World Superbikes. This gave me the idea to compete as a wildcard and work with the Ducati Superbike technicians once again. I know it’s going to be a very difficult weekend, also because it’s a while since I’ve ridden the Superbike but I do know the track well and so hope to get back into it after a few laps. I’ll try to enjoy myself and will of course be doing my best to score a good result and put on a good show for the public.”

Ducati say the original plan was to run with just Chaz Davies this weekend but Bayliss’ request to ride was too good an offer to refuse. The last time the Aussie rode the Panigale was at Mugello last May.

Bayliss won a whopping 52 World Superbike races during his superbike career with Ducati, including six victories at Phillip Island.

It’s a long shot, but could Bayliss take Ducati’s first win since 2012?