World Superbike weekend schedule set for shake up in 2016 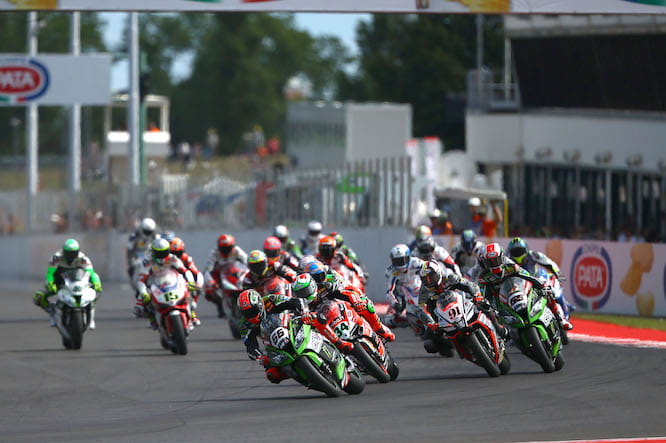 World Superbike race weekends are set for a shake up in 2016 as series bosses announce that the first superbike race will now take place on Saturday afternoons.

The move is part of an attempt by rights holders, Dorna, to revive interest in the championship which has seen attendance figures dwindle over the last five years.

All free practice sessions, including the timed qualifying practice, will now take place on Friday with Superpole moving to Saturday morning.

The first race will move from its Sunday morning slot and now take place at 1pm on a Saturday afternoon ahead of qualifying for the STK1000 and European Junior Cup classes. The second race will move to the slightly earlier time of 1pm on the Sunday.

“In this new format, Saturday is aimed at offering increased fan attendance and especially the chance to feel the adrenaline of WorldSBK racing during the 3 day event,” said race bosses. “In addition, Organisers and Sponsors will be able to offer an even bigger selection of special events and shows, allowing fans to enjoy both on and off track action, in a way never previously possible.

“These fundamental timetable changes will prove pivotal in getting WorldSBK fans closer to the action, both those in the grandstands and the millions watching live TV around the world. With more flexibility afforded to the schedule, the new time slots will ensure that each and every fan is able to enjoy the best of the WorldSBK paddock, either at the track or at home. Athletes and Teams will be more available with less timing constraints, whilst the new time slots will give more flexibility to Organizers to actively design and dedicate activities within each and every event, ensuring the proximity and engagement of Fans attending.”