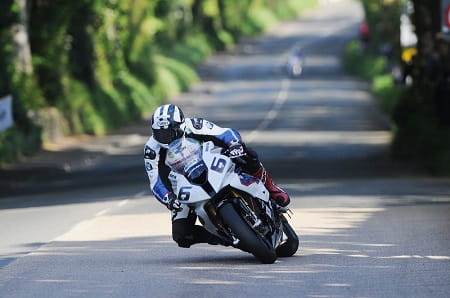 Wednesday Practice at the Isle of Man TT has been abandoned after red flags brought out by an incident at Barregarrow.

Despite poor forecasts, conditions were OK ahead of this evening’s practice and riders set off down Bray Hill on time. The red flags were drawn shortly afterwards, as one of the 2014 newcomers, Laurent Hoffman, crashed Barregarrow. The Belgian has been flown to Nobles hospital with suspected leg injuries.

With parts of the circuit already damp, when further rain fell during the red flag period organisers opted to abandon the remainder of the night’s track activity.

From a standing start, Michael Dunlop led the way before the red flag came out with a 128.6mph lap ahead of the Tyco Suzuki pairing of Guy Martin and William Dunlop.

Bruce Anstey leads the way in the overall practice times so far with an impressive 130.860mph lap ahead of John McGuinness.

Practice will get underway again tomorrow evening, weather depending.