History made as Harrison takes victory in Lightweight TT 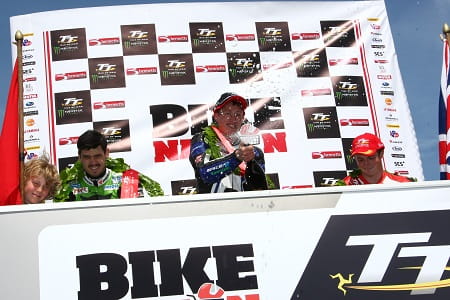 History was made in this morning’s Bikenation.co.uk Lightweight race as victory for Dean Harrison meant the Yorkshireman completed the first time a father and son had both won a TT race in the same year, after his father Conrad won Saturday’s first sidecar race.

It was drama from the off when the number one seeded rider and top qualifyier, Ivan Lintin retired at Union Mills on the first lap. Yorkshireman Dean Harrison rocketed into the lead building around five seconds on James Hillier, who led on the road. Olie Linsdell had a strong start on the Paton running in third place but dropped back at Ramsey, where James Cowton took over the final podium spot.

Harrison controlled the race, leading by 9.6 seconds as he pulled into pit at the end of the first lap but there was a battle stirring for third palce between Hillier and Cowton, with just a second separating the pair. At Bungalow on the second lap Harrison’s lead was up to 14.4 seconds with the battle for third place at large with Cowton just three seconds behind the Quattro Kawasaki of last year’s winner, James Hillier.

A lead of 16.958 seconds saw Harrison charge into the final lap ahead of the pair battling for third. Harrison crossed the line to take his debut TT victory with Hillier 16 seconds behind him. Keith Amor’s late charge saw him take the fastest lap with 118.989mph but it wasn’t enough to displace James Cowton from third position.