Hat-trick for Dunlop as he wins second Supersport race 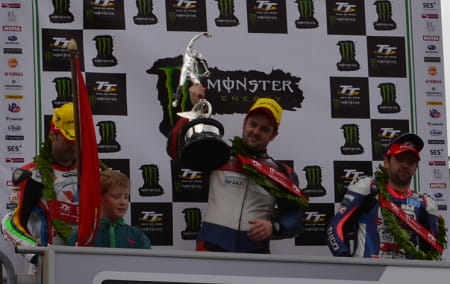 Michael Dunlop bagged his tenth TT victory on Wednesday as he lead the second Supersport race on the Isle of Man from start to finish to take the win ahead of Padgetts Racing man Bruce Anstey and his elder brother, William.

With Monday’s Supersport winner, Gary Johnson, out after a crash in the Superstock race yesterday, Dunlop charged down Bray Hill on the first lap to lead at the first check-point by just 0.079 seconds over his brother, who made a cracking start on the Tyco Suzuki.

It was James Hillier who took off down Bray Hill first with twenty-times TT winner John McGuinness opting to sit out the second 600 race, but Hillier had no answer for the trio that was the Dunlop brothers and Bruce Anstey.

Anstey, who gave Gary Johnson a hard time in Monday’s first race, took second from William Dunlop at Ballaugh Bridge, just one second behind race leader Michael Dunlop. It was bad news for Ian Hutchinson and Conor Cummins, who both retired on the first lap. 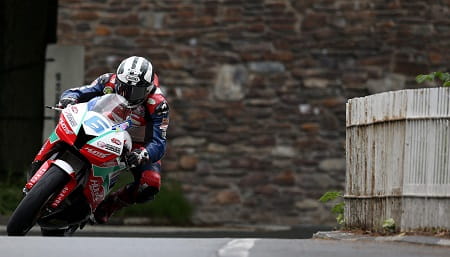 Dunlop’s lead had increased to 4.564 seconds by the start of the second lap before going on to double it by the time they’d made it round to the Ramsey Hairpin for the second time. A super-quick pitstop from Padgetts Honda saw Ansety gain a second on the Ballymoney man in the pit stops, but it took Dunlop until Ballaugh Bridge to make the time up.

Riding on circuit close behind Anstey for the final lap, Dunlop maintained his nine second lead until the pair got to the line, where Anstey nobly let the Ulsterman pass to take the flag first, with a final lead of nine seconds. William Dunlop crossed the line in third. An incident between Josh Brookes and Lee Johnson at Creg Ny Baa on the final lap saw the pair ruled out of a strong finish in fifth and sixth respectively, fortunately both riders were reported to be OK. Dean Harrison took forth ahead of James Hillier, with Keith Amor bagging a strong sixth on his come-back to the island ahead of leading privateer, Ivan Lintin. Dan Kneen was eighth ahead of Dan Stewart and Guy Martin rounding out the top ten.