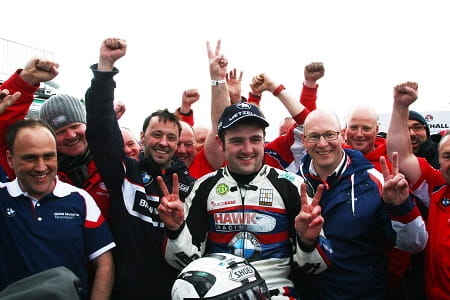 The Dunlop brothers ended this weekend’s North West 200 on a high, taking victory in three out of the five races run on the main race day. William Dunlop took victory in the first feature race from his younger brother on the BMW but Michael fought back hard in the second superbike fixture to take victory from British Superbike’s Josh Brookes.

After decent weather for Thursday’s races there had been hope fans at the North West 200 could enjoy a full day of racing on Saturday. With most of the UK basking in sunshine, the North West 200 race-goers weren’t so lucky, waking to a very wet Portstewart early in the morning.

With the riders having had no wet practice, they were given two laps to get used to conditions and make a decision on which tyres they’d use in the race.

The first race of the day was the second Supersport outing. On the warm-up laps riders found one of the worst scenarios, some parts of the nine mile circuit were wet while other parts were bone dry. The race quickly became a tyre gamble:  Which tyres would be the best? Would the weather change mid-race?

On a dry rear and intermediate front, Gary Johnson aboard the Smiths Triumph took the lead in the early stages but just one second covered the Brigg resident and the four riders behind him. Johnson dropped back into the pack as the rain came down mid-distance. Alastair Seeley and Lee Johnston shot to the front in a manic battle on the fourth lap. Bruce Anstey on the back of the pair and took the lead on the fifth lap before overshooting the Mathers Cross chicane, leaving the battle for the win with the two Ulstermen. The pair were as close as you like, and as Seeley looked to make a move at Metropole the Mar-Train Yamaha rider lost the front crashing into Johnston’s Honda. Left to pick up the pieces, Anstey crossed the line for the victory ahead of Manxman Conor Cummins and Smiths Triumph’s Johnson. 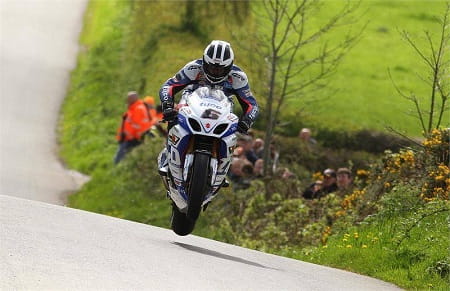 Next up was the first of the weekend’s Superbike races and it was Milwaukee Yamaha’s Ian Hutchinson taking the early lead. William Dunlop on the Tyco Suzuki GSX-R1000 took over on lap two, leaving Hutchinson to deal with a chasing Conor Cummins in third. Determined for success on the BMW S1000RR, Michael Dunlop pushed on through the pack to chase down his older brother, who was pulling a gap on clear road at the front.

He caught his sibling ahead of the final lap and it had looked like the job was done for the Ulsterman, but William fought back hard towards the end of the race, pulling a couple of hard moves to defend his lead in the closing sections. Conor Cummins took third for the Honda CBR Racing team ahead of Ian Hutchinson and Simon Andrews.

Conditions improved significantly ahead of the Superstock race, with the weather the best it had been all day. Veteran Michael Rutter took the lead on his Bathams BMW chased by Ulsterman Michael Dunlop on his MD Racing S 1000 RR. The pair fought hard on the second and third laps, swapping the lead on several occasions. After missing out on the Superbike race to his brother, Dunlop was a man on a mission, pulling a move on Rutter at Metropole and stretching a bit of a lead ahead of the fourth lap. 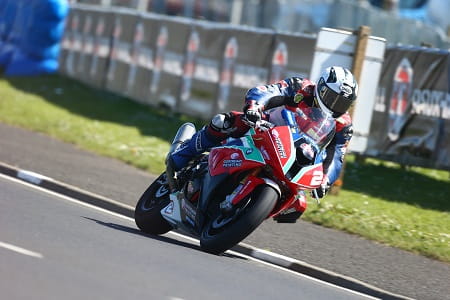 A horrific crash at Metropole for Simon Andrews brought out the red flag, with the BSB racer’s BMW on fire. Andrews was airlifted to hospital in a critical condition, in which he remains. Dunlop’s victory marked BMW’s first international road race win and it was a one-two for the German manufacturer with Rutter in second. Alastair Seeley took third place despite carrying an injury from the incident in the earlier Supersport race.

Michael Rutter shot off the line in the second superbike race in great conditions but it was British Superbike star Josh Brookes who took command of the lead on the first lap. Alastair Seeley then settled into second place.

After another tough start from pole position, Michael Dunlop fought through the back once again and was in third by the end of lap two. Brookes’ early lead had diminished leading to a three way battle between the Australian and two Ulstermen. Brookes dropped to third after cutting Mather’s Cross chicane as Dunlop took the lead and laid the hammer down, setting a fastest lap of 122.510mph in the process, stretching out a lead enough to cross the line in first place.  After his mistake at the chicane, Brookes gave it his all in the final lap setting a new outright lap record of 122.985mph to cross the line in second ahead of Seeley. Rutter took fourth ahead of Guy Martin and Conor Cummins. 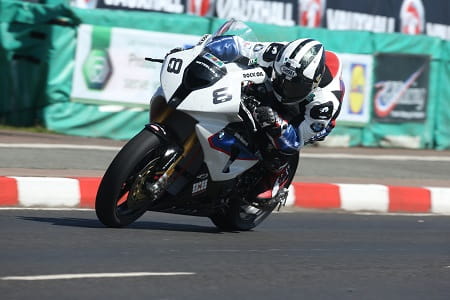 After being punted off by Seeley in the Supersport race, Lee Johnston recovered to take his second Supertwin victory of the week ahead of Michael Dunlop and James Cowton.

All the results from Thursday’s races can be found here.