Impressive form for Dunlop on return to BMW 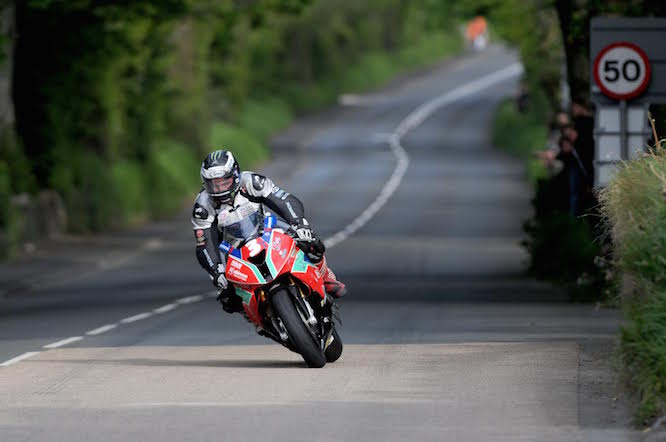 Michael Dunlop made a bold statement in tonight’s Isle of Man TT practice session, setting the fourth fastest time of the evening on his superstock-spec BMW S1000RR.

After sensationally splitting from the Milwaukee Yamaha outfit earlier today, Dunlop put in three laps on the stocker as his Buildbase BMW superbike was late arriving to the island. Even from a standing start, the Ballymoney rider impressed with a lap speed of 128.447mph before matching it on his second run.

On his final lap of the evening, he looked set to beat the fastest time set by Ian Hutchinson on the PBM Kawasaki Superbike, but a problem in the second half of his lap saw him ‘take it easy’ in the final sectors crossing the line with a lap of 129.659mph to dominate the superstock class and place fourth overall.

Hutchinson set the evening’s pace, breaking into the 130mph bracket for the first time this week with a 130.266mph, he was soon joined by John McGuinness who set a impressive lap of 130.030mph despite saying he got held up on the lap.

Bruce Anstey narrowly missed out on a 130mph lap, posting 129.957mph on his final lap on the superbike.

Tyco BMW’s pairing of William Dunlop and Guy Martin were fourth and fifth respectively, with William in 129mph bracket and Martin just missing out with a 128.963mph. Michael Rutter completed the top six on his BMW S1000RR.

Dunlop’s time put him well ahead in the superstock class, Ian Hutchinson was second on the time sheets with a 128.447mph lap, while David Johnson continued his strong form on the Smiths BMW in third.

MCN's Adam 'Chad' Child was 64th in the Superstock class on his Honda EMC/MCN Fireblade with a lap time of 114.635mph.

The supersport/lightweight session was temporarily stopped after an incident at Ballagarey, but as it resumed Gary Johnson took the top spot in the 600 class on the Mar-Train Yamaha ahead of Bruce Anstey and William Dunlop.

Veteran Ryan Farquhar was fastest in the Lightweight category ahead of Ivan Lintin and Jamie Hamilton.