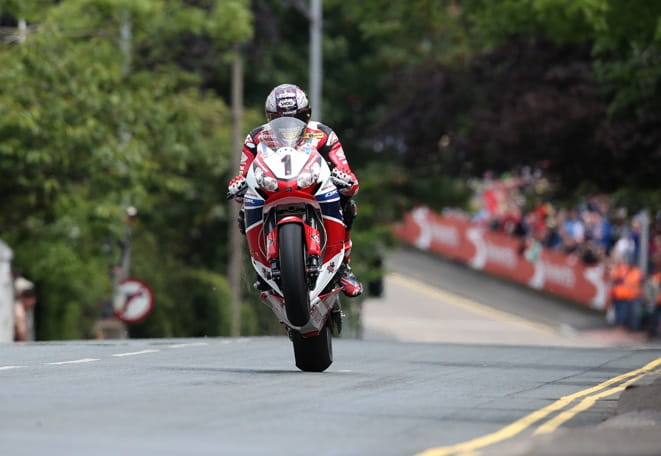 Entries for this year’s Isle of Man TT have now closed and organisers have revealed the start numbers for the top 20 riders, led by TT legend John McGuinness at number one.

McGuinness will set off down Bray Hill first for the second consecutive year on the Honda Racing CBR1000RR Fireblade, hoping to leave the gremlins of his 2014 wrist injury at the start gate. James Hillier will set off number two on the Quattro Plant Kawasaki.

After storming to four victories in the last two TTs, Michael Dunlop is a firm favourite to dominate this year. He’ll set off third on the Milwaukee Yamaha YZF-R1.

Michael Rutter will return to the TT this year as his focus switches solely to the roads having been unable to secure a British Superbike ride. Nothing has been announced for the veteran yet but it’s expected he’ll be starting from fourth position on the Penz13.com BMW.

HOW THE NUMBERS ARE ALLOCATED

It’s a difficult question. The top twenty riders are seeded based on the results of last year’s TT and previous years too. This year, the entire top twenty have lapped at over 127mph.

There is an element of choice; each seeded rider can submit their preference but it has to be between 1-20 as this is the order in which they will start the races.

The numbers are decided by a panel including the TT’s big boss Paul Phillips and a number of TT-bods who know who lapped how fast, when and on what bike over the last two decades.

Bruce Anstey will resume his custom number five with William Dunlop on the Tyco BMW in at six. Gary Johnson will start seventh on the GBmoto Kawasaki ahead of fans’ favourite Guy Martin in eighth on the second Tyco bike. Ian Hutchinson and Conor Cummins round out the top ten.

Dean Harrison will start eleventh on the Mar-Train Yamaha R1 ahead of comeback King Keith Amor on the RigDeluge BMW.

After lapping at 129.1mph last year, the TT’s fastest ever newcomer Peter Hickman will start seventeenth as he looks to up the game with Briggs Equipment BMW. Cameron Donald will roar off the line on the Norton SG3 in nineteenth.

Note that these start numbers are only for the Superbike/Senior races.