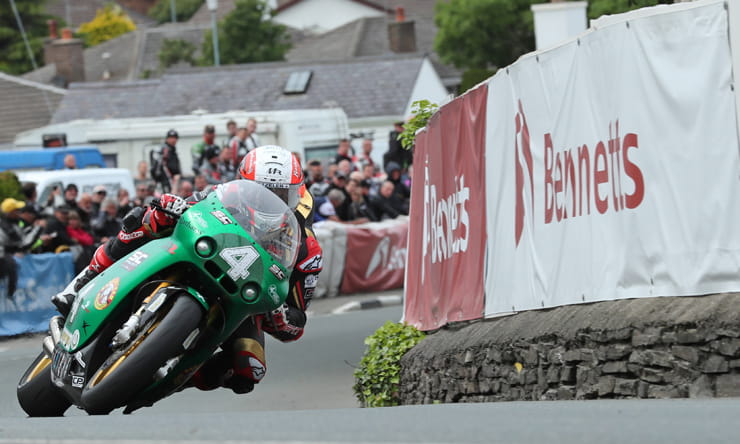 The 45 year-old West Midlands racer won the Bennetts Lightweight race in what proved sterling effort right from the off.

The laid-back old favourite has been creeping up positions all week, including a good dice with Hickman in the Supersport race. And today, riding the 650 Paton in the Bennetts Lightweight race, he blasted it.

Martin Jessopp - who finished second, and Peter Hickman - who finished third, were never going to get a look in during this race. Rutter was on a mission. But while Rutter led the race from the off with his teammate Stefano Bonetti just one second behind. Ivin Lintin, Daniel Cooper and Peter Hickman all raced hard behind Bonetti and Rutter.
It was the second lap when Rutter upped the ante, raising his speed to 120.362mph which increased the gap between him and Jessop to 10.5 seconds. Stefano Bonetti had been pushing Rutter for first place but he retired on lap two. Michael Dunlop aboard the Kawasaki / McAdoo Racing ER6 , meanwhile, had dropped back to seventh place.

Speaking after the race Rutter said: “It was brilliant and I could see Martin Jessopp on lap one and thought I’d have a good go of catching him. I thought ‘I’ve just got to get my head down and keep smooth’ and these bikes you know, they’re not the fastest things but the corners are quick and the things are bending and weaving. I just started to catch Martin and I came into the pit stop and I thought ‘I’ll get past him before I go into the pits and make sure I get out in front’ and I watched him pull off down pit lane and I thought ‘Oh no, here we go again. This is it.’ But the fuel took so long to get in. I got going and came out at Quarter Bridge but he was out of sight. So I got my head down and tried to pull it back but Martin was on the pace so much.”

But there were slightly worrying moments during the race for Rutter. He said: “The bike hadn’t missed a beat but I was hearing all noises on the last lap, like you do, and I was sure it was slowing up and I thought the exhaust was going to drop off and I thought ‘knowing my luck the chain will drop off’ but it ran perfectly. It’s been a good week so far.”
Second place man, Martin Jessopp said: “We’re not quite where we want to be but we are all on the pace.” Jessopp’s pace was owing to his pitstop. He went on: “The team worked so hard and were so committed to freeing up some time in the pits. We just put in the fuel we needed to finish the race. The boys worked really hard with that and it was a good fun race.” That fun was solely owing to the epic battle with Michael Rutter. Jessopp said: “I could see Michael’s pitboard and could see his gap to second place - which was me - so I knew that Michael was behind me. I thought ‘the old git! He’s coming after me’ but to be fair I rode that thing as fast as I could for four laps. That was a good and enjoyable race. Michael kept at it and was waving his arse at me over the Verandah.”

Hickman made his third podium appearance of the one week. He laughed: “I’m not getting bored of this but you might be bored of my face by now.” Ivan Lintin followed Hickman in fourth position, Daniel Cooper in fifth, Josh Brookes in sixth, Michael Dunlop in seventh, James Cowton in seventh, Michael Sweeney in ninth and Jamie Hodson in tenth. Rutter - will race again in the TT Zero race, which is yet be rescheduled, and the Senior on Friday.

With the Isle of Man again being affected by adverse weather, keep up to date with any schedule changes on Twitter, @bennetts_bike and on the official Isle of Man TT website, which can be found here. 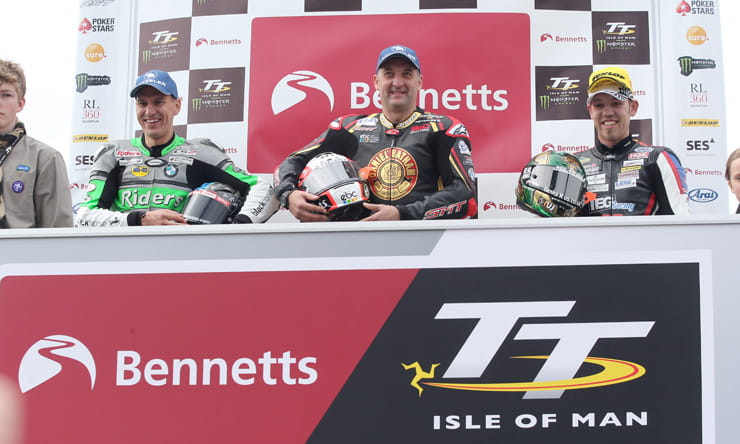