John McGuinness: “When they told me about Guy I nearly stuck my van through the hedge!” 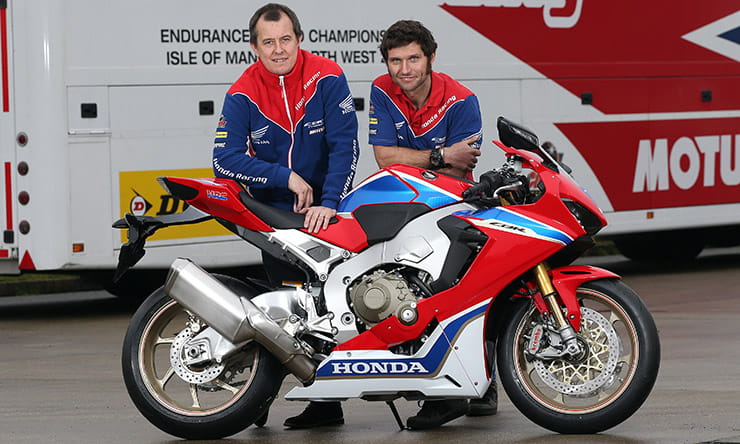 John McGuinness, the Morecombe Missile and winner of 23-Isle of Man TT races gave BikeSocial the low down on his Honda deal, his reaction to his new team mate, who he thought it might have been, his desire to win and his short circuit plans.

“At least I’m not doing it in the middle of May!” says 44-year old McGuinness who is just three TT wins behind the overall record belonging to the late, great Joey Dunlop.

“Moving house,” he clarifies. “But it’s all good.”

That’s been bumped down the priority list this week because last Wednesday Honda Racing announced that John McGuinness would not only be racing a Honda at the Isle of Man TT once again but he’d be alongside the effervescent Guy Martin. Furthermore, the duo would be riding the brand new 2017 Honda CBR1000RR SP2 Fireblade.

We spoke after the deal had been announced and McGuinness was quick to reveal he’d only known about the identity of his new teammate for less than 48 hours before the announcement.

“I was told 10 minutes before I got to Louth [Honda Racing HQ] on Monday morning when I was going to have pictures done. It was pissing down with rain and I was in my van and Neil Tuxworth [Honda Racing’s boss] rang me up and said “Errrrrr….by the way, your team mate is Guy Martin.” I nearly stuck my van through the hedge!”

“It’s an obvious choice when you sit back and have a think about it. I’m sure they were trying to do something with Michael Dunlop but I mean Guy is Guy. What can you say about him?!

You never know what you’re going to get. If you can get trucks out of his head and make him concentrate on his racing, then he’s definitely a dangerous package and can win. There’s not many riders that can go around at 132 [mph lap] and he has. In 2015 he did a 132.398 which is fast and that was with doing his TV work and all the rest of his stuff but this year I think he’s putting all that on hold and he’s going to concentrate on his racing.

I mean I get on with him alright, I don’t mind him. He is what he is, whatever that is! We get on alright, he’s got loads to talk about. When we were in Louth and I probably spoke to him more in half an hour than I have in the last 10 years of racing. He’s not a bad lad, he’s engineering-mad and he’s certainly a grafter I’ll give him that. We’ll win it for everybody though, he’ll bring a lot to the team and the pair of us will work together. We’ve got a bike to develop.”

The McGuinness/Honda deal: "I won't go anywhere else"

“Nope. It was always on the cards, it just needed a little bit of tweaking and tuning. Hand on my heart, I’m Honda through and through really for the last decade or more. So, it’s not broken so I don’t need to fix it. It was a gentleman’s agreement which had been on the cards and was never in doubt”

“I won’t go anywhere else, I’ve had a lot of success with the team and I’m still working with the same mechanics at the TT and when you sat on the grid looking down Bray Hill they’re the guys you want around you. I’ve got to stay in one piece, enjoy my racing and if it all comes together then I can still win.”

New Fireblade: “I want it to blow my skirt up”

“That old bike has been an amazing ambassador, the 08-16 ‘blade, I won a lot of TTs on that, had a lot of success at the North West and it’s been a British Champion too with Alex Lowes.

So it’s been a great package but now we draw a line under that, onwards and upwards. I needed that little injection of enthusiasm, looking at the new bike for the first time and listening to the details like the electronics and the power figures, the SP2 is a race bike on the road so the old fire’s reignited now, we’re good to go!

To be honest, what we’ve asked for as racers and riders is what they’ve addressed; the chassis, the steering, stability. Everything else has never been in question, it’s always been a great, great package. It just lacked a few ponies and some electronics like traction and various different buttons on the dashboard. I haven’t ridden it yet but I’m excited about it and will this weekend [in Portugal at the press riding launch], I want it to blow my skirt up and I’m sure it will!

It [the old bike] had everything except a little bit of power and they’ve listened to everybody and that’s what they’ve done. Honda are never going to go backwards, they’re always going to build something better. For whatever reason it was a bit late coming but ‘all good things come to those who wait’ I reckon!

I was on the podium in the Senior and Superbike race last year and I was happy with what we achieved. I had a little smile on my face knowing that I couldn’t get any more out of the bike or myself. The other two boys were faster but I don’t think they rode any better than me.”

There’s a four-day test at Monteblanco then we’ll go to Castle Coombe. People scratch their heads when we go there but it’s a rough old place with fast corners and bumps so it’s as close as we can get to the TT.

We’ve got to get our teeth into it, we’ve got to put some miles into the engine and put it through its paces. Everybody will be; you can bet your bottom dollar that the likes of Rutter, Hutchy, Dean Harrison will all be out racing. We’ve got 8 days of testing and if we need anymore then we’ll get it in. I’ll maybe do Oulton Park BSB to get that start line feeling back, that buzz and try to get a race under our belts. I miss racing. We’ve got so many fantastic circuits here for such a small, little country – Thruxton’s amazing, Oulton Park, Cadwell Park, Brands Hatch – such old school, fast, technical circuits. There’s a bit of everything and they take no prisoners. A lot of these F1-style European tracks have got loads of run-off but if you run off at Cadwell then you’re on the grass and testing your 120mph motocross skills immediately.”

Once he’s ridden the SP2 for the first time in Portugal, he’ll be hotfooting it to Australia to line up for Team GB at the annual Philip Island Classic before returning to Lancashire to pack some more boxes.