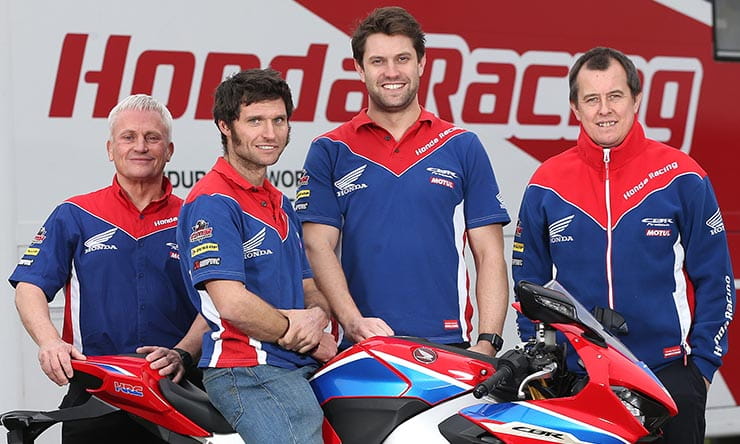 You may not have heard of Jonny Twelvetrees before, but this year the 31 year old will officially take over from Neil Tuxworth as Honda Racing’s new boss – in charge of the Big H’s TT and world endurance championship operations.

Needless to say, those are big shoes to fill: Tuxworth started as Honda’s Team Manager in 1989, following a very successful career as a motorcycle racer with numerous TT podiums to his name.

“I’ve been shadowing Neil for more than a year so it’s been great seeing how he works and by the time the TT comes around the change in team and manager will feel more organic.”

But there’s more to Twelvetrees’ role than the TT.

“I’m also taking care of endurance racing, as well as the road racing,” he said. “So we have a very busy schedule between now and the TT, with testing and endurance. We do the Le Mans 24 hour and Oschersleben in Germany, which is an eight-hour race. And we have a lot of hours to put in with the new Fireblade so we’ll be testing that in Spain and at Castle Combe a lot too.”

And though some would say that Twelvetrees (pictured above with outgoing boss Tuxworth and 2017 TT riders John McGuinness and Guy Martin) has had a gradual introduction to his new job as team manager - which officially starts in April - this year has proved a baptism of fire.

“As soon as we announced that we were launching a new Fireblade, which will be raced at the TT by Guy Martin and John McGuinness, it’s been crazy.”

Twelvetrees is a pragmatic man and appears to be taking the media storm in his stride. It’s a calm and measured approach that also applies to his decisions in racing.

“A lot of people said that we signed Guy as a PR exercise but we didn’t. We sat down and looked at the statistics over the past few years at the TT and Guy’s speeds were up there. That’s the bottom line: the numbers. And once we had that in mind, it was Guy’s name that kept cropping up.”

There is no-one better to learn from than Neil Tuxworth

Jonny Twelvetrees on his predecessor at Honda Racing

Twelvetrees is equally calm about his new role, taking over from Tuxworth, a real motorsport stalwart and TT aficionado.

“I try not to think about the vast amount of experience Neil has in this job. I will be starting as a newbie but before I know it I’ll be asking fewer and fewer questions and after all, there is no-one better to learn from than Neil.”

But while Twelvetrees will be new to his managerial role in racing, he’s far from new to Honda.

“I started here after I graduated from motorsports engineering in 2008. I was working in power products - everything that Honda produces that isn’t a car or motorcycle - with the European and Japanese factories, along with research and development in Europe.”

Eventually he found his way into racing and despite moving across departments within such a huge corporation as Honda, Twelvetrees says that the culture of care and precision runs throughout the entire business.

Indeed, it has done since it started motorcycle racing in the early 1950s. In 1954 Soichiro Honda, in an address to his employees, said: “The scrupulous care that is required when tightening a single screw, and the commitment that refuses to waste a single sheet of paper: these are what will open the way before you, and prepare a route for Honda Motor Company.”

And Honda continues to pave that route, as Twelvetrees’ says: “Staff at the Honda factory always dress in all-white overalls and wear the green baseball Honda cap. Even the office staff change into white overalls to sit at a computer every day. I think this is a good thing: it shows how much reverence the staff have for the products. Everything is done with utmost care and attention.”

Similar care and attention is being paid to Twelvetrees’ transition into managing numerous racing efforts: this has been a gradual, planned process and though he doesn’t officially become team manager until April, he’s learned enough of the ropes already.

But Twelvetrees’ racing background is not so much asphalt-based as aqua-based. And it was this that enabled him to become involved with Honda in the first place.

“I was a boat race driver / navigator / co-pilot and travelled around the UK boat racing every summer. And that was my introduction to Honda.

In fact, it was his boat racing - not the TT - that first took him to the Isle of Man.

“I first went to the Isle of Man to compete in a race at Douglas Bay. I remember having my 21st birthday out there so we all went out for a night but the next day in the boat was awful. Luckily I wasn’t driving but I can remember having to take my helmet off a few times.”

Now, Twelvetrees is firmly on solid ground: Tarmac is his new terrain.

The question is, will be be making the race team wear factory whites? “I’ve thought about it but perhaps that would be too much of a culture shock,” he says with a smile.

But whites or no whites - this year will no doubt be among Twelvetrees’ most memorable at Honda. He will occupy centre stage at motorcycling’s mecca: the Isle of Man TT Races.

“My goal sounds like a cliche but it’s true: I want us to win, in endurance racing and on the roads.”