‘I couldn’t miss the Isle of Man TT’ – Taylor Mackenzie 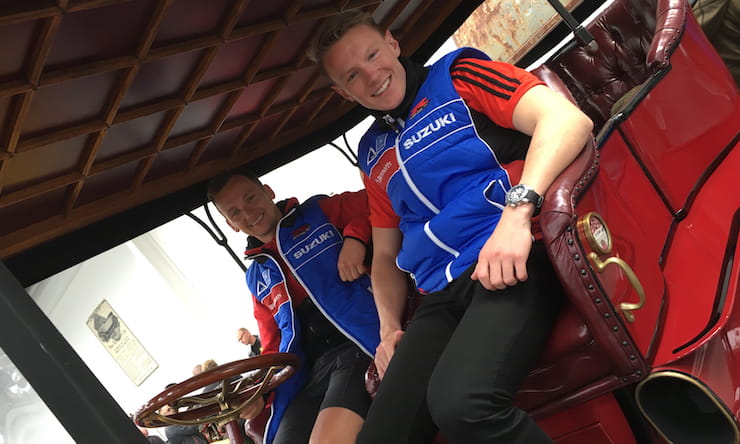 In our exclusive rider blog, Bennetts-backed BSB competitor, Taylor Mackenzie, talks about what he got up to while he was over at the Isle of Man TT…

“I’ve just got back from Barcelona – I flew there pretty much as as soon as I got back from the Isle of Man and then we’re travelling up to Scotland for the next British Superbike round at Knockhill – it’s a very busy time for me, I’m flat out but loving it.

Bennetts invited me out to the Isle of Man TT this year with Richard Cooper [Bennetts Suzuki Superstock competitor] and of course we jumped at the chance. We love the event and we get on really well so I knew it would be like having a mini holiday with a mate.

We arrived on the Monday and the sun was shining, which is always good for the TT. We got there in time for the Supersport race so headed down to the paddock to watch from the start line, where we did a quick interview with ITV4.  I’ve been on the start line before but there’s still nothing like the feeling of watching the bikes setting off at such close proximity. The atmosphere is amazing!

After the Supersport race, it was time for the sidecars to head out, so we went down to Creg Ny Baa to see them coming down the fast straight and then making the right turn. I love being so close to the action and feeling the rush of air once the competitors have gone past, it gives you goosebumps every time.

After a quick shower and a change, we went for dinner with the guys from Bennetts and a few journalists. It was nice have a few drinks, but we were due to get up at 7am the next morning for an interview with Manx Radio TT so didn’t go too mad…

We woke up on Tuesday to some pretty wet and wild weather. Some places had flooded overnight and the fences near the Subaru course cars had blown over, just missing the thousands of pounds worth of cars there! Despite the weather, we had an awesome day, going all over the island and sampling everything the Isle of Man has to offer. We went to the museum in Jurby, go-karting, to the Ramsey Sprint and over to the Laxey wheel, which I’d originally thought was a Ferris wheel, but it turns out it’s a waterwheel that was used to power mines back in the day!

We had planned to ride a Suzuki at the Ramsey Sprint but wimped out as the weather was far from ideal. It had actually brightened up by the time we got there though and I instantly regretted not having my kit, especially when a bloke who had built his bike in a shed offered me a go! It was a great event anyway, even as a spectator.

We had a great couple of days. I wouldn’t miss the Isle of Man TT – it’s definitely one of my favourite times of the year. On to Knockhill now, one of my favourite circuits on the BSB calendar. I’m looking forward to getting back on my Suzuki GSX-R!”

Isle of Man TT: What to do when there's no racing?