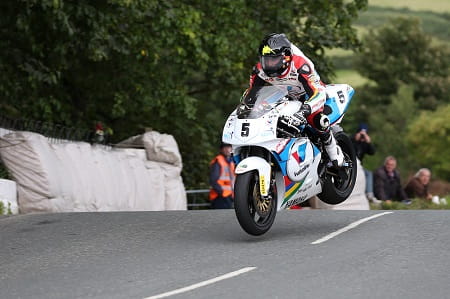 Bruce Anstey took charge of the pace in last night’s Classic TT practice, posting the fastest lap of the week so far aboard his YZR500 with an average speed of 122.523mph.

Lack of adhesion at various points of the circuit following overnight rain didn’t stop Michael Dunlop, who set the pace in the first half of the week; the Ulsterman recorded a 122.173mph average speed on his opening lap aboard the XR69 Team Classic Suzuki. Dunlop pulled into pit lane at the end of his lap saying he’d had a few issues and ‘nursed her home’ for the second half of the lap, despite having set what was the fastest lap of the weekend.

There had been worries surrounding Anstey’s YZR500 with the classic two-stroke Grand Prix machine not having completed more than one flying lap in the first two practice sessions. That wasn’t the case on Wednesday however, with Anstey, who holds the outright lap record around the mountain course, recording his 122.523mph lap on his second flyer. Saying the bike gets lively with a lighter fuel load, the Kiwi reckons there’s more to come…

Kawasaki-mounted James Hillier set the third fastest time of the Wednesday session of 119.396mph, just eight seconds ahead of Russ Mountford on the Team York Suzuki. Steve Mercer was sixth ahead of Ryan Farquhar and Gary Johnson. 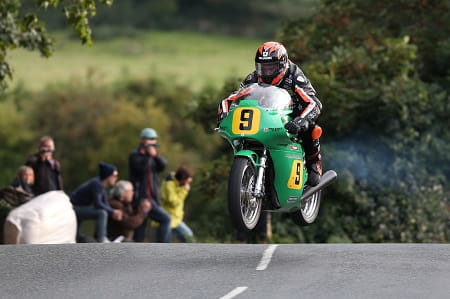 Team Winfield Paton’s Ryan Farquhar and John McGuinness were fastest out of the blocks in the 500cc class with the pair leading at Glen Helen on the first lap before McGuinness pulled up at Ramsey with technical issues. Farquhar went on to top the session with a fastest lap of 111.102, just off Olie Linsdell’s race lap record from 2013 (111.660). Alan Oversby was second with a 107.239mph on the Davies Motorsport Honda. Michael Rutter, having been flown in to replace Dan Kneen at the eleventh hour, set the third fastest 500cc time as he gets to grips with the Ripley Land Racing Seeley.

Roy Richardson took over at the top of the Formula 2 class with a 110.349mph lap ahead of James Cowton and Chris Moore. In the 350cc class William Dunlop took charge with a 101.271mph lap ahead of Welshman Ian Lougher and Daniel Cooper on the fastest Norton.

With the weather forecast doubtful for the back-end of the week, riders fear they may not get a shot at practice on Thursday evening.