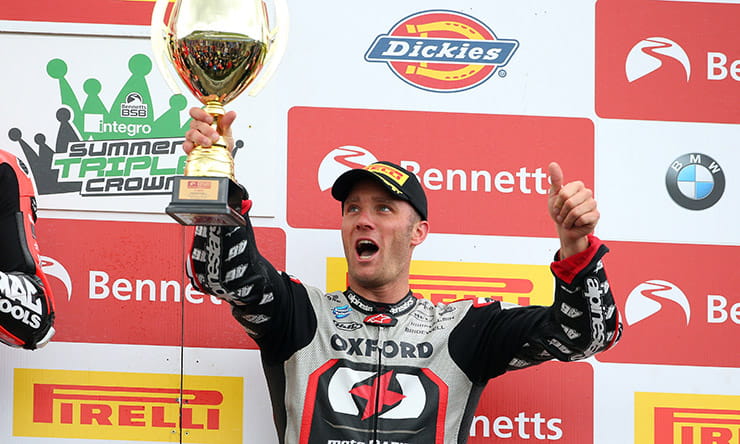 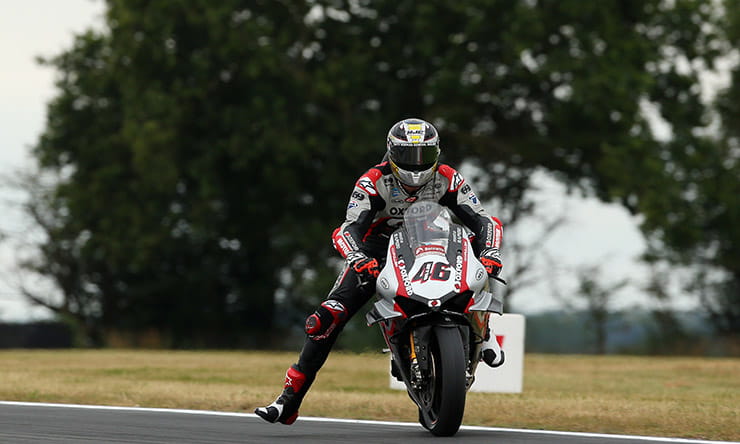 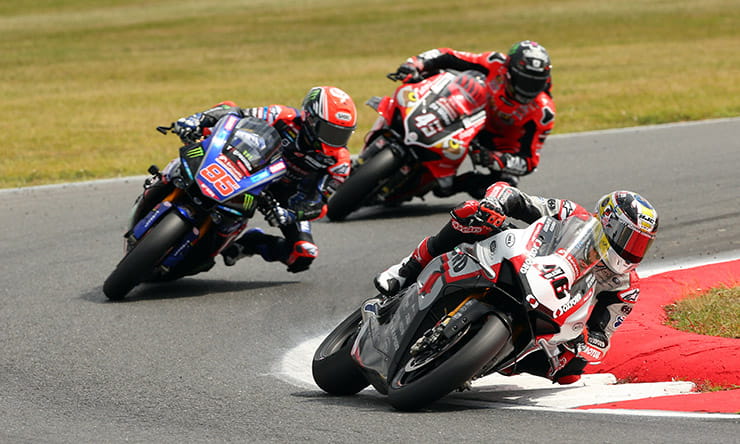 Bennetts British Superbike’s Mr Consistent Tommy Bridewell suffered his first non-finish of the 2019 season at Snetterton, although making up for it in the second race by collecting third place in a V4R 1-2-3.

Bridewell struggled for most of the weekend in Norfolk with front-end feel, but in his Sunday man self he came out fighting, leading the way in the opening race before crashing out on the seventh lap.

However, he kept up his brilliant podium scoring record up in the second outing, taking third place and adding to his podium credit tally.

But the BSB fans favourite admitted to BikeSocial’s man on the ground that he’s still lacking something to his fellow Ducati counterparts.

“It’s a tricky one because the team are doing a great job and we just can’t quite put our finger on what we’re missing,” expressed a frustrated Bridewell from the Snetterton pit-lane.

“If it’s me, if it’s the bike, I don’t know. The team are doing a mega job, we just need to find that little bit. The BeWiser team are obviously doing a phenomenal job, and it’s great for Ducati, but the thing that frustrates me is that I’m not able to react to them.

“In race one I felt so good, I just lost a bit of feeling from the front and I had to yield a little bit.

“I rely a lot on the front feel, if I haven’t got front feel then I’m f****d, I’m absolutely f****d. The benefit for me with this Ducati is nothing but, well a lot, but the main thing is the feeling I have from the front. 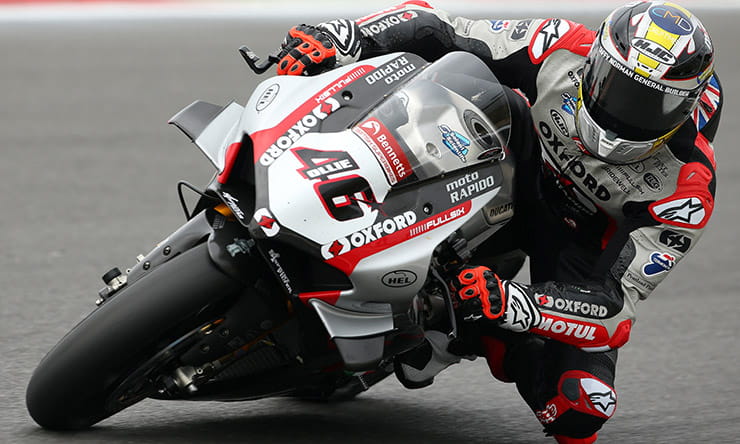 Front end feel was what was missing for Bridewell

“In race two I didn’t lose feeling from the front, I just didn’t like the feeling I was getting so I had to surrender sort of.

“We will get it sorted, I’m hoping for Thruxton we will have the new swinging arm as at the minute that’s the only thing PBM have over us.”

Since Snetterton the Oxford Products Ducati team have taken delivery of the upgraded swinging arm, which docked the serial number ‘001’, the very first of which in the UK.

But it is yet to be seen whether that update will give Bridewell the edge over Championship leader Scott Redding and close friend Josh Brookes, but he stated that he and the team will keep their heads down.

“We’ll just keep our heads down, I don’t know if I’m putting a bit too much pressure on myself, and the team, to be delivering more.

“But ultimately we’re leading races, we’re on the podium and we’re fighting for race wins. We’re not quite getting it, but I’m just hoping that when they do come, a lot come. We’ll just see what we can do.”

The front-end feel has been an issue for many riders in the Bennetts British Superbike Championship in 2019, with many teams switching back to the older model of Ohlins front fork. 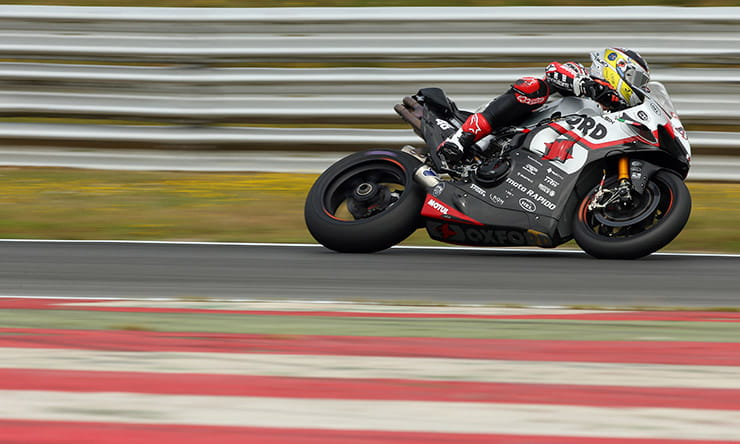 Even after a crash Bridewell regrouped for more podium credits

Although the Ducati’s, and Tarran Mackenzie, onboard the McAMS Yamaha are the only teams not to play around with the front-end, but Bridewell admitted he struggled at Snetterton.

But he quickly stated that there is nothing wrong the 2019 model of Ohlins fork, other factors hindered his progress at the former airfield circuit.

Bridewell said: “We’ve had the new forks in since I got the bike, we’ve always ran with new forks. There’s certainly nothing wrong with the them by any stretch of the imagination.

“The feeling of the bike is amazing, there was just a few things that I think I could have done with a morning warm up after race one, just to go and build in to it.

“I would have rather just chipped away and attacked for the next race, but we were straight in to it, and we just have to deal with it.

“The bikes great, and the Ohlins forks are working great, we’ll just try to make that next step ready for Thruxton.”

Bridewell’s consistency has been nothing short of brilliant in 2019, finishing every race in the points, scoring seven podiums before making the trip to Snetterton.

And that kind of consistency is Championship winning worthy, but Bridewell admitted he was disappointed with the mistake he made in the opening race, but he consistently keeps racking up podium credits. 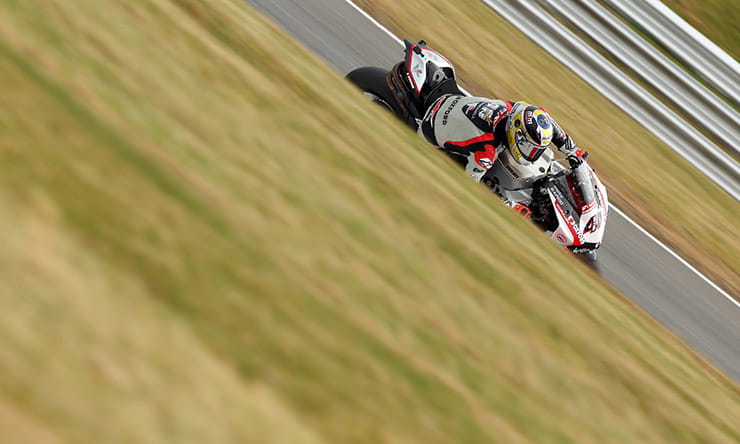 Tommy still found a way to the front

“Course I am, I’m consistently s**t,” laughed Bridewell. “No, I’m joking. Consistency has been mega. Race one was the first time I’ve crashed on my own, Keith Farmer took me out at Silverstone but unfortunately my first real crash was in the race at Snetterton.

“I can’t be disappointed, but I am disappointed. We’ll keep racking the podium credits up because ultimately when the Showdown starts all I need them to have is maybe one DNF, and me win, and all of a sudden it’s bang level.

“I am conscious that I can’t let them get too far away and when I need to start reacting I will. I am trying and that’s why I’m a bit disappointed because I am trying to start to react, but I’m kind of having no answer to it.

“We’ve got some big, big analysing to do after this weekend to try and find what we’re missing.

“The problem is that we don’t know what we’re missing, because I’m happy with the bike and the bikes working amazing, but we are obviously missing something. We’ll get it sorted and we’ll come back stronger to Thruxton.”

Bridewell is now currently on his way to Japan for the gruelling Suzuka eight-hour endurance event, which last year he finished fourth with the S-Pulse Suzuki squad. 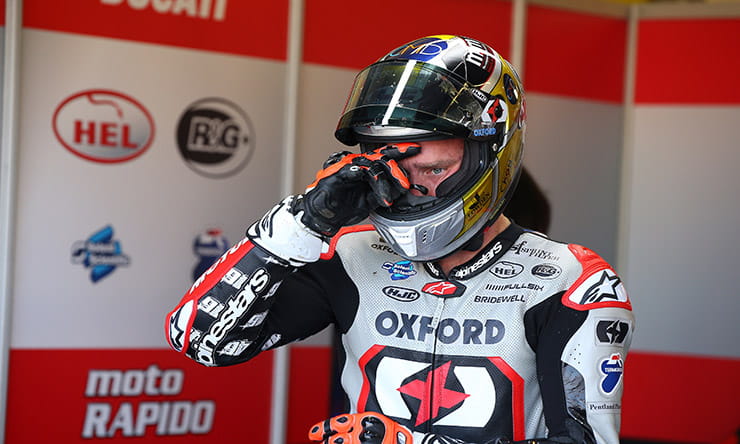 The Championship is now closer than ever

This year he’ll be joined by Buildbase Suzuki’s Bradley Ray, who strangely wasn’t handed the factory Yoshimura ride after his heroics in 2018.

And Bridewell expressed that the event holds a special place in his heart, and also went on to heap praise on the young Kent star.

“I love the eight hour, but you know what with that race I’d love to turn around and say my expectations are to fight for the podium, that’s our goal, certainty after coming fourth last year and we’ve got Brad who’s riding well.

“He is riding well, I know the results and people possibly look at Brad and perhaps the results aren’t coming.

“That kid I can guarantee, sod it I’ll say it, if he was on a Ducati he’d be fighting for race wins without a shadow of a doubt.

“Brad, like me, when working with him at Suzuka, seems to rely on the front end and that’s the benefit of the Ducati. Anyway, going off subject, I feel like we can fight for the podium, but with the eight hours anything can happen.