BSB | Oulton Park preview: all you need to know 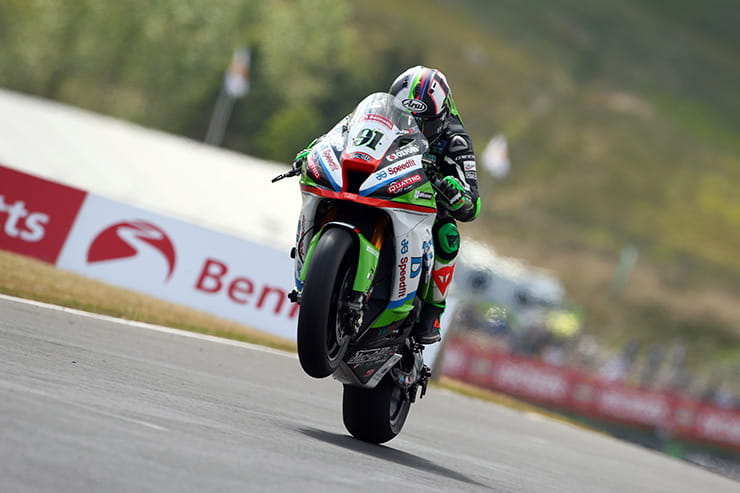 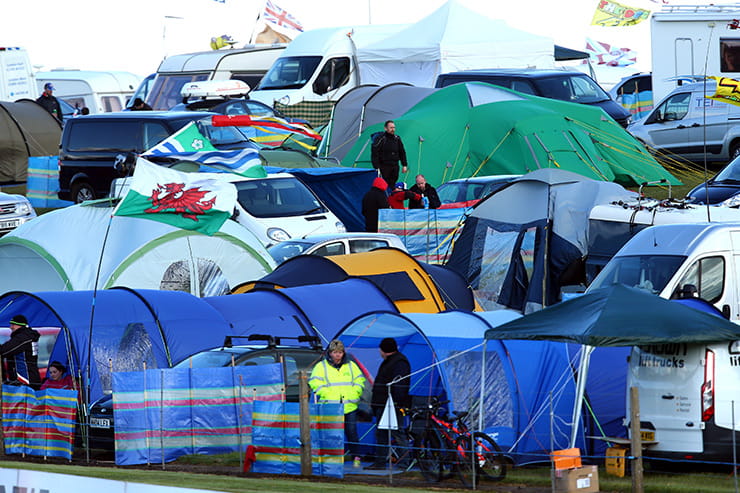 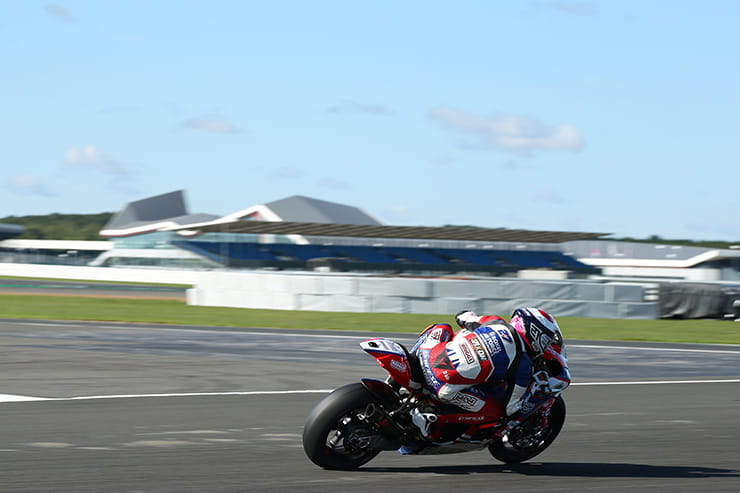 The top six has been confirmed and seven races remain; the Bennetts British Superbike Championship is back in action this weekend for round 10 at the wonderful woodland circuit of Oulton Park in deepest Cheshire.

Leading the way by 45 points is JG Speedfit Kawasaki’s Leon Haslam with the largest points gap over second place in Showdown history, currently sitting on 568 points. His nearest challenger is Jake Dixon onboard the RAF Regular and Reserves Kawasaki, but it’s looking unlikely that the 22-year-old will achieve his dreams of becoming Champion.

The stats are pointing all in the favour of the ‘Pocket Rocket’, with 12 wins out of 19 and, a record only bettered by Leon Camier in 2009. The Derbyshire-man has the largest amount of podium credits amassed by any rider in Showdown history, and one more impressive statistic…Haslam has finished every race this season, the only rider on the grid to do that in 2018. 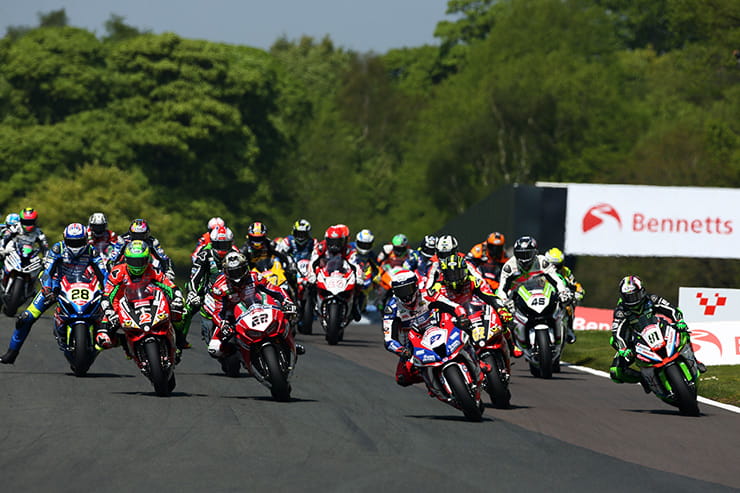 Haslam looks to extends his lead at Oulton

This rate of consistency is what has eluded Haslam in previous years, crashing out the lead in 2016 and three mechanical faults in 2017 saw Shane Byrne once again snatch the crown from the grasps of Haslam.

Last year at Oulton saw Haslam make a strong start to the final three rounds of the Championship, taking victory in the opening race from John Hopkins by just 0.314 of a second, with Josh Brookes rounding out the podium.

Dan Linfoot took his second victory in as many rounds in race two on a drying track, with Haslam just behind in a strong second place and Bradley Ray third, picking up his maiden BSB podium.

Where to watch and park

Oulton Park is a dream for all supporters, with great vantage points around the 2.6-mile circuit. But where is exactly the best place to see all the action?

Well, the final corner Lodge is the number one place. With all the action settled into the final corner of the circuit, many races have been won and lost into the banked last turn with only Deer’s Leap before the finish line.

One road leads down to the famous woodland circuit from the A54 or A49, with two car parks easily accessible, one at the main gate, and one around the back of the circuit looking out on to the Hizzy Chicane. 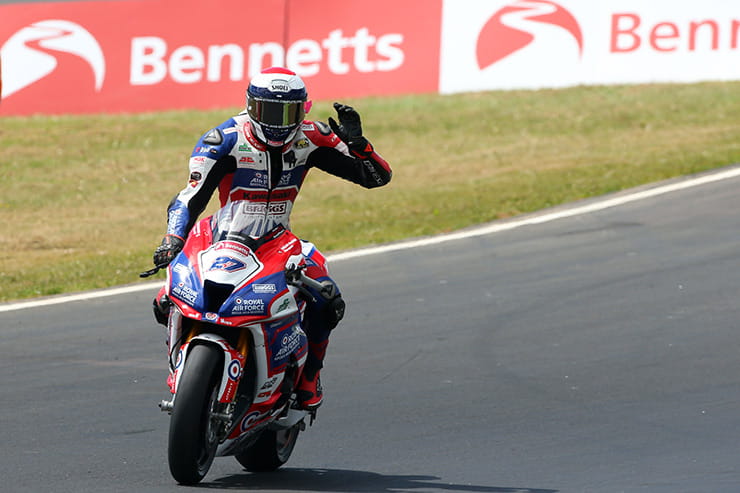 Bike parks are located inside the main entrance, with free paddock stand holders available on entrance to the venue.

The main circuit café is the best place to keep well fed and watered throughout the weekend, although burger vans and other food venders will be available around the circuit.

Covered viewing areas are at a minimum around Oulton Park, with tree’s covering the final corner and the Knickerbrook chicane around the rear of the track, so it’s advised to bring a brolly in case of inclement weather to ensure you can keep dry while watching all the action.

If you fancy watching all the racing in style then upgrading to the hospitality packages available are worth keeping in mind. With great views of Cascades and fantastic food, you can enjoy the opening weekend of the Showdown in style. Call 01474 875224 to book your place.

Action on Sunday takes place from noon with a pit-walk from 10:30 - 11:15, however we advise to take your place in the queue early. 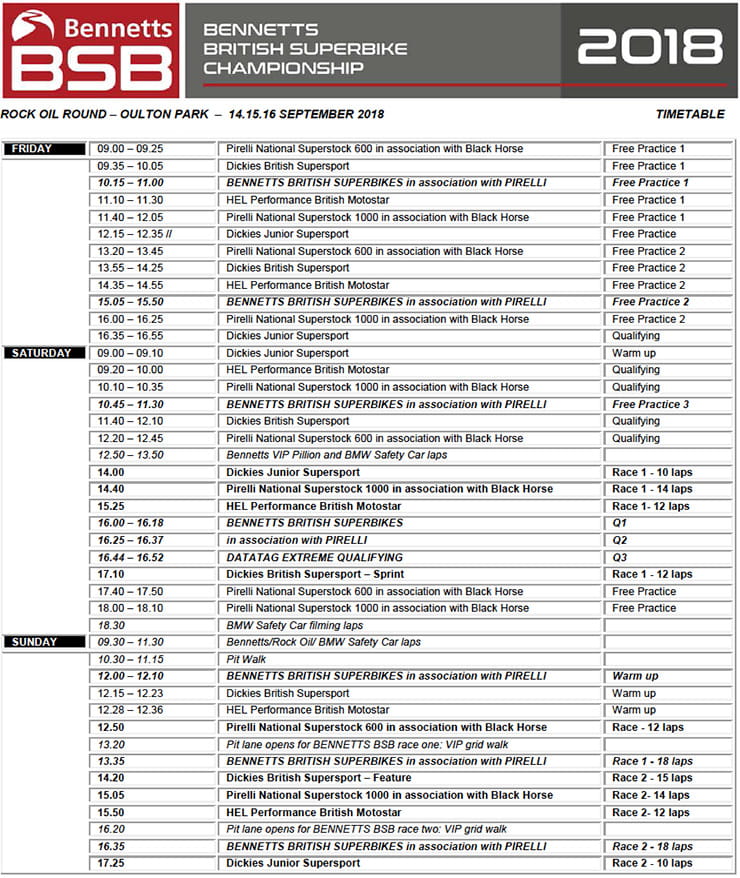 All the times you’ll need for the weekend

Remember the Bennetts British Superbike superhero’s aren’t the only class to take to the track on Friday, Saturday and Sunday, the support classes are also in town and ready to entertain you.

Jack Kennedy and Ben Currie are battling it out in the Dickies British Supersport Championship, with just 31 points separating the rivals with six races remaining. This battle will go down to the wire and it’s sure to re-ignite at Oulton Park with two races over Saturday and Sunday.

The Pirelli National Superstock 1000 title race is also a feisty affair, with just 13.5 points separating the top three of Joe Collier, Keith Farmer and Billy McConnell. But it’s Alex Olsen who is the man in form, with a victory at Silverstone, he’s one man the top three must keep one eye on as they battle it out to be number one in 2018.

Two races across the weekend offers up to 50 points in Cheshire, and it was Keith Farmer who took the spoils in the visit to Oulton Park back in May so he’ll be looking for a repeat of that performance.

Ryan Vickers collected the Pirelli National Superstock 600 Championship last time out at Silverstone, making him the first British Champion of 2018. Although he’s already sown up the title, he’ll be out to increase his points tally and stamp further domination on the series. 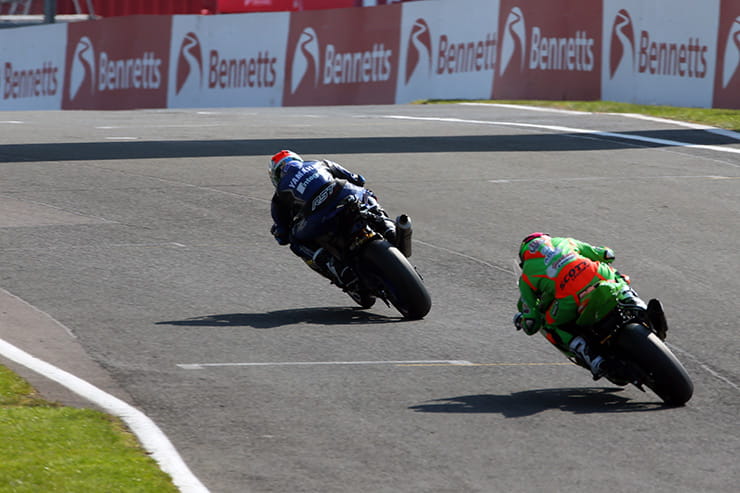 Jake Archer could be crowned the Champion in the Hel Performance British Motostar Championship at Oulton Park on Saturday, with a lead of 60 points, all he needs is to finish third or higher in order to collect his first British crown.

Storm Stacey is his closest rival but is hoping for misfortune for Archer to claw his way back into the frame to take the Championship to a decider at Brands Hatch.

Eunan McGlinchey leads the way of the Dickies Junior Supersport Championship, with a 31-point gap over his nearest rival Kade Verwey. McGlinchey will be looking to extend his lead with two races over the weekend at Oulton Park, this Championship battle looks set to go down to the wire at the final round at Brands Hatch, however the Championship can be won if Verwey fails to finish both races.

Grandstand seats are available throughout the weekend at Old Hall, Knickerbrook and Lodge for those fans who want a better view of the action.

Tickets for the tenth round of the series are available on each day at the entrance to the circuit, with race day admission available from £34 for adults. Prices for practice day, Friday, start from £10, with a £16 admission fee for Saturday.