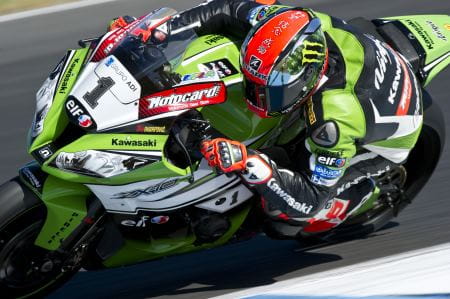 Tom Sykes is one of the best British motorcycle racers in recent years. He fought through some difficult years when he first moved to the World Superbike Championship but really came of age in 2012, when he finished second in the World to Max Biaggi. Last season, Sykes pulled off some breath taking performances to clinch the World Superbike crown, becoming the first Brit to do so since James Toseland in 2007.

Something tells us Sykes has a lot more to give and the combination of the Yorkshireman and the latest Kawasaki ZX10-R evidently works very well. Therefore it’s not surprising that he’s the hot favourite to take the title again this year.

Sykes has shown consistent improvement in each season for the last three years, if both he and Kawasaki can improve just an inch further in the season ahead he will be unstoppable. Unlike many riders who aim for MotoGP, Sykes has admitted he’d rather stay in World Superbikes winning than head to a CRT/Open machine in Grand Prix and with that mentality he could be on for record breaking success.

We saw three flawless weekends from Sykes in 2013, where he took pole position and both victories at Donington, Imola and Magny Cours. If he has many more of those this year, others will struggle to get a look in as in current form, Sykes on his day is simply unbeatable.

It’s said that winning your first world title is the hardest, so with that in mind Sykes puts Great Britain in its best position in years – the country to beat.