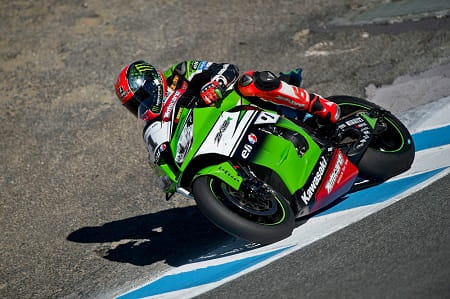 Tom Sykes extended his championship lead at Laguna Seca after following up a third place in race one with victory in an action-packed second outing. Aprilia’s Marco Melandri took his third race victory of the season in race one ahead of his team mate, Sylvain Guintoli.

Sykes took the hole shot in the first race ahead of the Aprilias of Marco Melandri and Sylvain Guintoli. The Brit’s lead didn’t last for long, first time into the corkscrew he went in a little too hot and slipped back to third place. With Sykes having to find his feet again, fourth-placed Chaz Davies saw an opportunity to take third. Pushing hard, the Ducati man went down heavily on lap two.

Leon Haslam made a strong start from the third row of the grid, ahead of Jonathan Rea in fifth. Ducati’s Davide Giugliano forced his way past the PATA Honda duo on lap four and began to chase down the leaders. The Italian had almost caught third-placed Sykes when he overshot his line into the corkscrew, almost slipping off his Panigale 1199. Jonathan Rea passed his team mate for sixth but later lost significant ground running into the gravel. Voltcom Crescent Suzuki’s Eugene Laverty retired from the race with technical difficulties on lap eight.

At the front, the Aprilias of Melandri and Guintoli seemed to have the edge over Sykes, with the gap standing at 1.2 seconds. It had looked as though Guintoli would be able to make a move on his team mate but the Italian pulled the pin with seven to go building a buffer large enough to comfortably take the chequered flag. Davide Giugliano defied a last lap charge from Toni Elias to finish fourth ahead of Jonathan Rea, Leon Haslam and Alex Lowes. David Salom finished top EVO machine in tenth place. 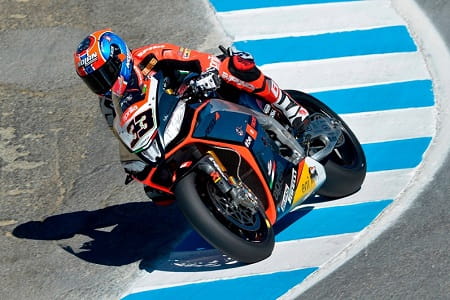 A front-pack began to form, with Sykes leading the Aprilias with Laverty and Giugliano in tow. Melandri took second place from his team mate into lap three. Looking for a way past Loris Baz, Alex Lowes crashed at the top of the corkscrew bringing out the red flag. The rider was taken to the medical centre but later reported to be OK.

Set to be held over seven laps, the restarted race soon got underway with a quick re-start procedure and a rocket start from Marco Melandri saw him lead into the first corner ahead of Sykes, Guintoli and Toni Elias. Elias’ strong start didn’t last for long as Jonathan Rea passed him for fourth on the second lap.

There was more drama as the bikes came across the stripe for the second time, this time for Sylvain Barrier who suffered a nasty fall crashing into the concrete pit wall bringing out a second red flag. Barrier was taken to the medical centre and later reported to be ‘conscious and alert’.

Marco Melandri again took the hole shot in the third attempt of getting the race to the flag. Sykes followed the Aprilia with Guintoli in fourth ahead of PATA Honda’s Jonathan Rea. Sylvain Guintoli slipped by Toni Elias into third before the end of the first lap.

Fighting for the lead with Sykes, Melandri crashed out after running wide at turn two and the drama didn’t stop there as Davide Giugliano fell at the corkscrew, his bike falling down the hill and narrowly avoiding oncoming traffic.

Melandri’s fall left Sykes a bit of a gap into the second half of the seven-lap race ahead of the Aprilias of Guintoli and Elias. Keen to keep his championship chances alive, Jonathan Rea took third from Toni Elias with a lap to go before the Spaniard also lost out to Suzuki’s Eugene Laverty.

Sykes crossed the line to take his eighth win of the season with Guintoli second and Rea third. Laverty took a reassuring fourth place ahead of Elias with Loris Baz in sixth and Leon Haslam seventh. An impressive race for Bimota saw Ayrton Badovini and Christian Iddon cross the line seventh and eighth respectively, although the duo were discounted from the result as always with Bimota yet to meet World Superbike’s homologation regulations.  David Salom crossed the line as first ‘official’ EVO bike in tenth although with Bimota’s exclusion he moves to eighth with Andreozzi and Camier promoted into the top ten.