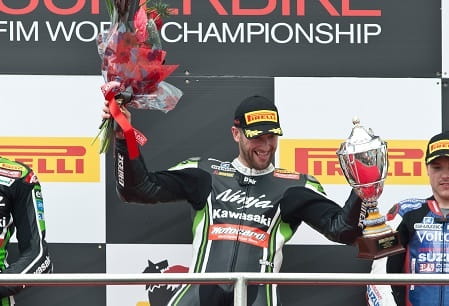 Tom Sykes has described today’s first World Superbike race as the ‘best he’s ever ridden’ in the class. The 2013 World Superbike champion faced a tough challenge fighting through from the third row but getting on with it, he laid down the gauntlet and fought his way through.

Even though he went on to take the win, the Yorkshireman says he was thinking about pulling in to the pits in the early stages after his Kawasaki ZX10-R started cutting out, but fortunately the issue resolved itself.

“I got a decent start but I got pushed onto the marbles in turn one in the first part of the lap and the bike started cutting out so I was very lucky not to have someone push me from behind” said Sykes.

“I was thinking of coming in to the pits on that lap but luckily the Ninja had a bit of a cough and she was running smooth after that.” 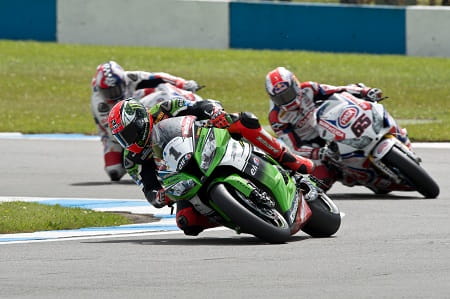 As far down the field as tenth at one point, Sykes had to pull some tough passes to break through the field. At one point, a scrap between the Kawasaki man and Sylvain Guintoli saw the Frenchman’s Aprilia on the grass at the esses, but Sykes says his moves were fair.

“I had to make some hard passes; one of them was helping Sylvain [Guintoli] out onto the grass again! I showed him a wheel and he released the brakes, then I released, then we both put on the brakes, then he released again and I thought ‘you’re on the outside pal so good luck!’.

“It was a fair move though, I have total respect for my competitors. All my moves are calculated and normally they go to plan. It was a great result, I think it was the best race I’ve ever ridden in World Superbikes. Most of my victories have been from start to finish and I think a lot of people doubted my rubbing skills but today I’ve been able to prove they aren’t so bad! From a satisfaction point, I was very happy” 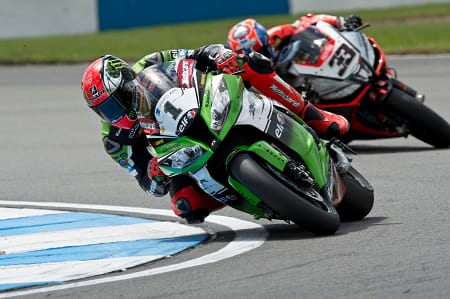 In the second race, Sykes made it a little easier for himself by getting a good start. He was then helped a little more after a collision between the PATA Hondas of Rea and Haslam with Ducatis Davide Giugliano. Further help was at hand for Sykes when Alex Lowes ran into the back of Marco Melandri, sending both riders into the gravel. Finding himself in third after these incidents, Sykes fought hard to follow his team mate to the front, before passing him and pulling the pin to form an untouchable gap.

“In race two we got a good start. There were a couple of guys who, let’s say their moves weren’t so calculated and it helped me a bit! There was one move that skittled a couple and then there was another one that skittled another two so I’ll chuck them a fiver later! The bike was working well and I knew Loris [Baz] had a great pace and that Sylvain Guintoli goes well at Donington. It went from there really, when I got passed I tried to pull the pin and fortunately they couldn’t catch me!”

Sykes’ double victory places him into the lead of the championship, ahead of Jonathan Rea and Loris Baz. The Superbike World Championship resumes in two weeks’ time in Misano.