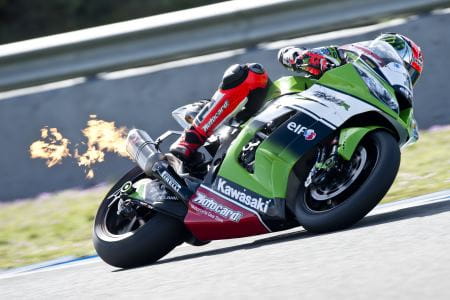 Tom Sykes has ended the European pre-season World Superbike testing calendar on top of the timesheets at a private test at Jerez. Kawasaki Racing Team was undergoing final preparations at the Spanish circuit alongside the Factory Aprilia team and PATA Honda, plus a couple of EVO Kawasaki riders including Jeremy Guarnoni and Alessandro Andreozzi.

Sketchy weather saw the teams struggling for dry track time, with PATA Honda enduring a complete wash-out on the first day of their test with no option to extend as the bikes would be heading to Australia immediately afterwards.

Sykes, riding with the number one plate, set a fastest time of 1’42.1 which is impressive considering the conditions. Loris Baz was just a tenth behind with the second fastest time. With a 1’42.4, former Grand Prix race winner Marco Melandri was third on his Aprilia RSV4 followed by Jonathan Rea’s PATA Honda just a few hundredths behind.

Having missed all pre-season testing thus far after undergoing shoulder surgery, Sylvain Guintoli returned to track for the first time since the last round of the 2013 season and showed he may well still be a force to be reckoned with, setting a time just a tenth off team mate Melandri.

Of the EVO representatives, Jeremy Guarnoni was fastest, one second off fifth placed Guintoli. Superbike rider Leon Haslam set the seventh fastest time of 1’43.7 after what was a tough test for the Derbyshire rider. Kawasaki Racing Team’s official EVO representative David Salom set a time of 1’44.1 while Pedercini’s Andreozzi was ninth with a 1’44.5.

Teams will now head to Australia for the final official pre-season test at Phillip Island between 16-17 February ahead of the season starting the following weekend.