Melandri doubles up as Aprilia dominate in Jerez 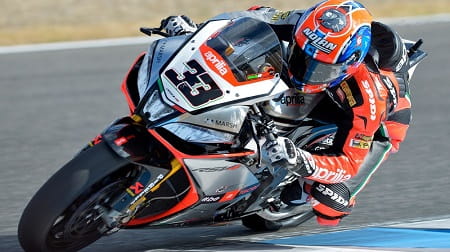 Marco Melandri took the double victory in Round 10 of the Superbike World Championship at Jerez to prevent team mate Sylvain Guintoli from capitalising on a tough weekend at the office for championship leader Tom Sykes.

Aprilia’s duo of Sylvain Guintoli and Marco Melandri took early control of the race, with the Frenchman slipping past his Italian team mate into turn three. Loris Baz took the lead at the end of the fourth lap and began to tow his compatriot away from Melandri in third.

Not content with second, Guintoli retook the lead on the eighth lap as the closing pack, now led by Ducati’s Davide Giugliano closed in.

Melandri took third from Giugliano before the Ducati man crashed out at the start of the eleventh lap with reigning champion Tom Sykes also running off track as he attempted to break through the pack.

Drama struck towards the end of the race as Loris Baz went down from third after touching the back of Marco Melandri’s Aprilia with Alex Lowes also crashing out on the Voltcom Crescent Suzuki.

Melandri took the lead from Guintoli with five to go to bring it home for an Aprilia 1-2 with Chaz Davies completing the podium for Ducati. Jonathan Rea finished fourth ahead of Tom Sykes and Eugene Laverty. 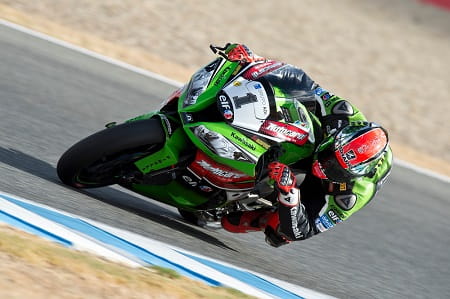 Guintoli once again took the lead early in the second race to be chased by Tom Sykes, who made a much better start ahead of race one victor Marco Melandri.

Meticulous in his pace, Melandri passed Sykes before mid-distance to stalk down his team mate in a repeat of his first race attack, passing the Frenchman to take the double win in the final third.