Lowes remains with Crescent Suzuki in 2015 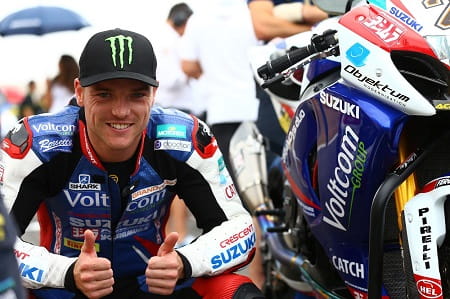 Alex Lowes will remain with the Crescent Suzuki team in the World Superbike Championship next season after penning a one-year extension to his deal with the Dorset-based outfit.

Lowes moved up to the World stage with the Voltcom-backed Crescent Suzuki squad this season after winning the British Superbike Championship with Honda in 2013 and despite facing a challenge aboard the under-powered Suzuki GSX-R1000, the Brit has shown pace capable of podium finishes.

A number of crashes for the 24-year-old leave him 11th in the title standings with two rounds remaining but team boss Paul Denning is confident Lowes can progress towards the front next season.

The announcement brings an end to speculation that Lowes could join his brother in the Moto2 Grand Prix paddock next season.

“My first year with Voltcom Crescent Suzuki in the World Championship hasn’t always been easy but overall it’s been great” said Lowes. “You learn a lot about yourself and the team when things don't quite go right and now at this stage of the year we know exactly where we need to improve, both on and off track. I'm really enjoying my riding again after some injuries early in the year and looking forward to continuing my improvement and being more consistent in 2015.

“The World Superbike Championship is a fantastic series to race in, it's been great to race at so many new tracks but it has also meant I've had a lot to learn! My second year will allow me the opportunity to continue my development with the benefit of a year’s experience, so I’m really looking forward to the next stage in my career.

“I want to say a huge thank you to the Voltcom Crescent Suzuki team and all the sponsors and partners for their continued faith in me, bringing me up from BSB Champion to the World level and continuing that support into my second year as a World Championship racer. I’m confident we can challenge at the front with the Suzuki GSX-R next year and will be aiming, as ever, to achieve my very best for all involved.”

It is currently unknown who will partner Lowes with his current teammate Eugene Laverty heading to MotoGP.