Iddon raring to go ahead of World Superbike debut 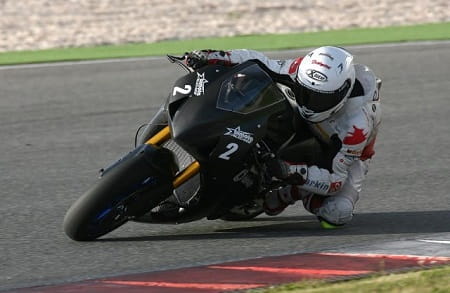 World Superbikes has been good to British riders for many years, but ahead of the 2014 season getting underway it wasn’t looking too good for Brit, Christian Iddon as his ride was cast in doubt as World Superbike bosses seemed reluctant to revise homologation figures so the brand new Bimota BB3 could race.

That wasn’t the only problem either, the race bike hadn’t even turned a wheel ahead of Phillip Island so Iddon was forced to miss the first round. Things are now looking up though, the twenty-nine year old tested the bike two weeks ago and the homologation requirements have been revised to allow the BMW-powered Bimota to compete for now at least.

Speaking to Bike Social exclusively following a five-day test in Spain, Iddon said: “The test was good actually, very good. We didn’t get half as many laps as we needed to because everything was against us! We were very unfortunate with the weather; it was like absolute monsoon conditions! We did want to ride in the wet as it’s a brand new bike with no previous data but sometimes it was just too dangerous to go out so we had to be a bit more cautious.

“The very small amount of running that we did was very positive in my opinion. I did exactly ten laps in the dry and roughly about sixty in total.. I don’t have a great deal of experience on 1000cc bikes so to me the power is quite new but I enjoyed it. The engine is something we don’t really have to worry about as it’s standard as is the ECU. The chassis felt good, it didn’t feel like a big bike! Jumping off a 600 and on to a 1000 I expected it to feel bulky and big and that wasn’t the feeling I got. The bike feels light and the chassis feels agile, it was really good actually.”

Iddon’s Alstare team is no strangers to superbike success, having taken numerous race victories and the 2005 title with Suzuki. Entering the EVO category for 2014, the team is aware they won’t be towards the front of the main pack but claim their target is to run with the top EVO bikes. However after such little testing time, Iddon knows running with the likes of Niccolo Canepa and David Salom is a big ask.

“We’ve got plans as a team to be right up there but at the moment it’s hard to say where we’ll be. We are going to need a little bit more time as it’s quite hard to fully evaluate what we’ve got but what we did do was very positive and we’ve collected a lot of data so hopefully they can work a bit. Ten laps in the dry on a brand new bike is next to nothing. 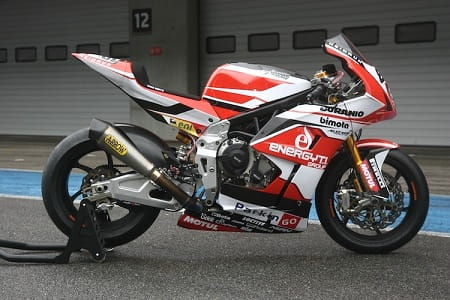 “We’ve got a lot of work to do even to get to a base set-up so until we get to that sort of stage it will be hard to tell but the initial signs are very positive. Even in those ten laps we got to a decent lap time that I looked at and thought it was OK considering. I think we can be competitively reasonably quickly but we do need to change our mind-set a little bit to realise that the first few races are going to have a lot of testing involved. We’ll be trying out a lot of new things, new parts and even little bits like footpegs and handlebars that we need to continue work on. It’s very much in its infancy but the base from what I can tell in both wet and dry conditions is pretty amazing, it rode like a bike that had had more laps than it had done!

“I wanted to ride every single minute of every day but that wasn’t possible and we’re sort of on the back foot in that respect but I am very positive about it. “

While Alstare tested in the pouring rain in Portugal, a number of other World Superbike teams were not all that far away in Jerez and despite some rain, the test was mainly dry. In hindsight, even though testing in Jerez would have been drier, Iddon defends the team’s decision to test privately.

“I think testing privately was the right way to go as we’ve obviously got a lot of things to work on. We did a lot of runs where we were out for just one lap so it was good to be out of the limelight away from prying eyes! Not because we’ve anything to hide but so we could get our heads down and crack on.

“When you’re doing one lap runs and things like that people always wonder what the issues are but it’s not necessarily the case, you can test a lot of things in a couple of laps! It kept us out of the way which was good and from a riding point of view it kept me from comparing lap times with the other guys as that’s really not what we want at the moment. If I was at Jerez I would have wanted to go out as hard as I could and that’s not necessarily the best thing to do in testing.

“Unfortunately we were unlucky with the weather, we were only 300k away from Jerez and they got two days of dry running and we didn’t get any! It’s actually quite cool to have a track to yourself for a couple of days.”

There was doubt about whether Iddon and the Alstare squad would be ready for action come the second round at Aragon following such little pre-season testing. While he admits that the bike has a long way to go, Iddon highlights that he himself is ready for the challenge.

“In terms of physical preparation I am very ready for Aragon but we know we aren’t ready with the bike. Even if we had done five days solid testing we’d have been miles behind the amount everybody else has done! We needed to do 100 laps every day and we didn’t get that so no, we aren’t at the point of development we’d like to be.”

“That said, the little bit of running I did, in some strange way I feel a connection with the bike. It often takes me a long time to get a feeling with a bike and call it mine, last year it took me until about mid-season until it became my bike but I’ve got a great feeling with the BB3 and I really enjoyed it. The only thing I’m worried about is my riding – I’ve had a long time away from riding and a long time away from riding a 1000cc bike. I might be able to put in a lap or two at half decent pace but the consistency and outright speed might take a little bit of time to get back up there. That’s another reason why it’s a shame we didn’t get much running.

No rider wants to be sat on the sofa watching their fellow competitors out on track and Iddon is no exception, although he says while it has been difficult he knows he’s got to focus on the rest of the season.

“Not being at Phillip Island was a killer and it’s been difficult waiting and waiting so just for us to get on the track it’s a huge achievement by the whole team as it’s been done in such a short amount of time. I’ve had to change my mindset a little bit, I was devastated not to be at Phillip Island but there was a reason for it and I accept that. I can’t wait to get out there at Aragon, I really enjoyed riding again in Spain last week and I can’t wait to see where we get to!”