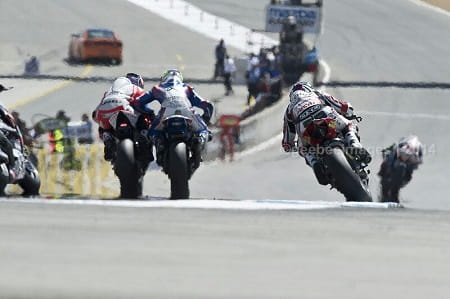 Christian Iddon has hit out at claims he was responsible for Sylvain Barrier’s crash on the home straight at the Laguna Seca round of the Superbike World Championship. The Brit reckons the crash was caused by a mistake from Barrier in the last corner.

The pair collided on the start-finish straight at the Californian circuit leading Barrier to fall from his S 1000 RR, crashing into the concrete pit wall. The Frenchman suffered a broken heel in the incident, which wasn’t the pairs’ first coming together that weekend. Iddon claims he and Barrier touched after the BMW man got a poor start in the first race of the weekend.

Barrier has since claimed that Iddon was responsible for the race two clash, stating it was the Englishman who crashed into him. Iddon has hit back at this claim,  saying Barrier went wide at the final turn and cut across into the path of Iddon’s Bimota.

No disciplinary action was taken against either rider.

“I had hoped to not to need to comment on the crash of Sylvain Barrier in Laguna Seca and have so far stayed quiet. However, following recent escalating and extreme allegations as well as poor behaviour from other parties involved, I feel I now must respond” said Iddon in a team statement.

“The ‘incident’ between Sylvain Barrier and myself at Laguna Seca was nothing more than a racing incident and had it been anything more than that Race Direction would have been involved and they have not. 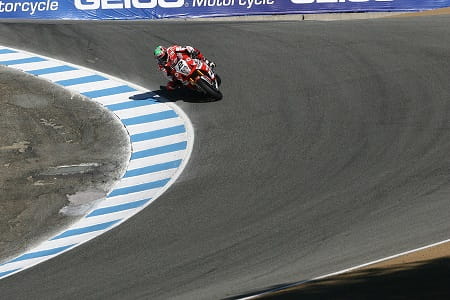 “Nobody in the press has been in contact with me to ask my side of what happened, and the fact is that there is no video evidence so far to support any other version of events. Therefore I find it hugely unfair for certain press personnel to be presenting an opinion as fact.

“Sylvain had tried to pass me into the final corner and ran extremely wide. I was able to accelerate well with a good line - unlike Sylvain who lost all acceleration and tried to cut my line by continuing to turn left after the exit of the turn. Our paths crossed and I was very lucky not to crash (even a piece was broken from my boot) when he collided with me. Unfortunately Sylvain fell from his machine.

“Picture evidence also shows that I gave more than ample room on the exit of the turn and was almost in the middle of the circuit, and ahead, at the point of contact.

“Despite this, I still deem it to simply be a racing incident in much the same way I deemed the start of Race 1 to have been a ‘racing incident’ when Sylvain hit me off the line after making a poor start and, as in the other collision, turned left to cut my line. Once again I was lucky not to crash, but I accepted the mistake and said nothing.

“Sylvain is a hugely talented racer and it is a great shame that this behaviour and these comments have occurred. Despite all of this, I do of course still wish Sylvain a full and speedy recovery.

“I understand we as a team are very much in the media spotlight, which is ever increasing, as is the number of other riders commenting on our racing. I can only take this as a huge compliment as Team Bimota Alstare, my team mate Ayrton Badovini and even myself are proving what strong competition we are now, and will be in the future.”

The Superbike World Championship resumes at Jerez in September.