Guintoli closes the gap in the wet at Magny Cours 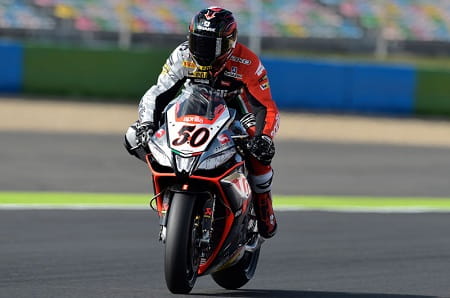 Sylvain Guintoli closed the gap to Tom Sykes at Magny Cours today with a victory and second place in the wet. The gap now stands a twelve points between the two rivals with just one round remaining.

Jonathan Rea took the holeshot in a sodden race one ahead of Sykes and Giugliano with the Aprilias of Sylvain Guintoli and Marco Melandri in fourth and fifth.

With the title at stake, Guintoli wasted no time barging his way past Ducati's Giugliano for third position before pulling a move on championship rival Tom Sykes for 2nd by the end of the first lap.

Chaz Davies, who was fighting with Sykes for third place, crashed out on the second lap as Sylvain Guintoli took the lead from Jonathan Rea.

Loris Baz passed Tom Sykes on the fifth lap with the Huddersfield rider then losing position to Marco Melandri, the Italian rapidly improving his pace. Giugliano pulled a strong move on Jonathan Rea for second place on the fifth lap before losing his 1199 Panigale and crashing out.

Marco Melandri passed Sykes into lap six with Jonathan Rea dropping back to fifth place. Both Kawasakis ran off allowing Rea to re-group.

At the front, Melandri chased down Sylvain Guintoli before passing him on the fourtheenth lap. His lead didn't last long however, with an angry face displayed on his pit board informing him to drop a position to his team mate, who is fighting for the title with Tom Sykes.

Melandri moved out of the way for Guintoli on the seventeenth lap. With Loris Baz leading Tom Sykes in the battle for fourth, Kawasaki also issued an order for the French rider to allow his team mate past, which he did by slowing on the final chicane.

Guintoli won ahead of Melandri and Jonathan Rea, with Sykes and Baz rounding out the top five. Haslam took sixth ahead of Giugliano, who remounted after his crash. Sylvain Barrier won in the EVO category. 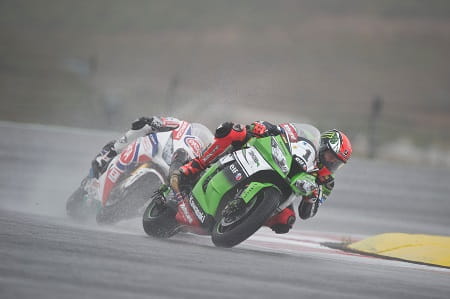 Conditions had deteriorated for the second race. Davide Giugliano took the holehshot on the Ducati ahead of Jonathan Rea, Tom Sykes and the Aprilias.

Marco Melandri slipped underneath Sykes into the first chicane with Guintoli following suit. Giugliano crashed out of the lead on the third lap.

Guintoli passed Melandri for second on the eigth lap of nineteen and was elevated to the lead on the eleventh lap as Rea crashed out of the lead at the final chicane. Melandri passed his team mate a lap later to take the lead.

Aprilia’s angry face reared its head again towards the end of the second race instructing Melandri to let his team mate past. Leon Haslam shot past Sykes for third place on the penultimate lap, managing to hold off Sykes’ fight back.