Davies: "Panigale has potential to win" 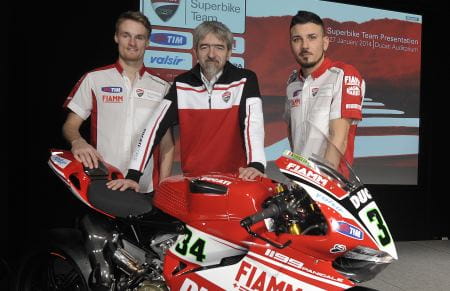 Despite a dismal season for Ducati in 2013, Welshman Chaz Davies reckons that the 1199 Panigale has the potential to win races this season and his team mate, Italian Davide Giugliano has already claimed the bike feels ‘amazing’.

Last season saw Ducati go without a victory for the first time in the history of World Superbikes after their star rider, Carlos Checa suffered a multitude of injuries throughout the thirteen round calendar. Things weren’t going to plan for Ducati, on top of an off-form Carlos Checa  reports also suggest there was friction between the Alstare squad running the team and the Bologna factory behind it, these reports were perhaps confirmed when the two announced a premature split at the end of the season.

The Italian manufacturer has re-joined forces with Feel Racing for the season ahead, the outfit with whom they’d had significant success in the past. Coupled with the new rider line up of Chaz Davies and Davide Giugliano, Ducati could have the ingredients for success this season, if the bike is right.

“I haven’t been riding the Panigale for very long yet but I feel that my bike has a lot of potential still to explore and evaluate” comments Davies, who won three races on board BMW’s S1000RR in 2013.

It’s important to continue to work hard and to stay focused on improving each component of the bike but this is a challenge that I’m very much looking forward to. I think that the bike has the potential to win races; we just need to keep working in the same direction and make the most of every opportunity that presents itself during race weekends”

I think Davide and I will develop a strong working relationship and this will allow us to support and spur each other on to achieve positive results on the track.”

Giugliano, who has ridden for Ducati before, added: “My new Panigale is something amazing, a bike that immediately feels like mine and with which I’m immediately in tune. I’m very pleased with how the bike is developing and so this is already very positive.

Chaz is undoubtedly a great rider, a great talent and this season he will surely be one of my toughest rivals but I know that we’ll work together and will encourage each other to always do our best. We also owe it to the fans of course, as we want everybody who has always followed and supported Ducati to have fun and enjoy the results! I’m more than ready to get going and can’t wait to start the championship.”

With new Ducati World Superbike Team Manager, Serafino Foti, stating that with neither Chaz nor Davide having reached the peak of their career, Ducati clearly has a lot of hope pinned on their new signings.