Brits on top as WSBK heads to Donington 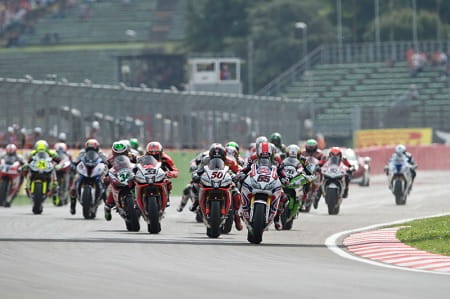 The Superbike World Championship heads to Donington Park this weekend and with Brits packing out the sharp end of the standings, it has all the ingredients to be an absolute corker.

The 2.498 mile Derbyshire circuit hosts the fifth round of the 2014 championship and will be the only round of the prestigious series to be held in Great Britain after Silverstone was dropped from the calendar. Seven Brits line up on the grid this year, eight if you include Eugene Laverty, and they’ll all be keen to show their talent in front of their home crowd.

Jonathan Rea leads the championship by four points after taking victory in the last three races. The PATA Honda man has enjoyed his best ever start to a World Superbike season having taken five podiums since race two in Aragon. Having struggled in the championship last year, Rea will want to make the most of his championship lead and impressing the home crowd is a must. The Ulsterman won at Donington Park in 2012 and often delivered a good result in front of home fans at Silverstone. 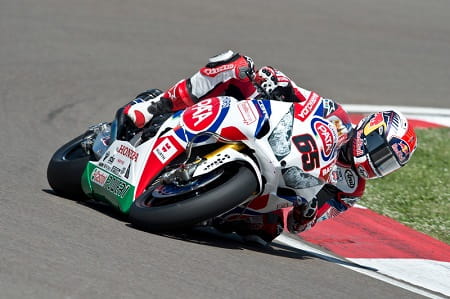 Four points behind Rea in the title chase is the reigning champ, Tom Sykes. Having taken two victories so far this season, Sykes has made a respectable start to the season but Rea’s consistency at the top end has just pipped him to the title lead. Twelve months ago Sykes stormed to a dominant double victory at Donington Park from an equally dominant pole position. However, the Huddersfield man also took the double at Imola in 2013, where he could only manage third and fifth this time round.

After taking a double podium for Ducati in Imola, the Bologna factory’s first dry podium since 2012, Chaz Davies will be hoping to carry the momentum through to his home round. The Welshman didn’t have the best of times on the BMW at Donington last year, but Ducati has a positive history at the circuit so there’s always hope.

As the only British outfit in the series, Voltcom Crescent Suzuki will be looking to impress on home soil this weekend. Alex Lowes has had a tough start to his debut World Superbike season with the added task of learning new circuits. At Assen, where the Lincolnshire youngster had ridden before, he took his debut podium and the Brit is looking to make further progress just a stones throw away from his Derbyshire home. The twenty-three year old stormed to a double victory at Donington in the British Superbike championship last year on his way to clinching the title. Lowes’ team mate, Eugene Laverty will also be keen to show improvements this weekend after having a hard time since taking victory in the season opener at Phillip Island. Donington hasn’t treated the Irishman too well in previous years, although he did fight to a respectable podium in 2013. 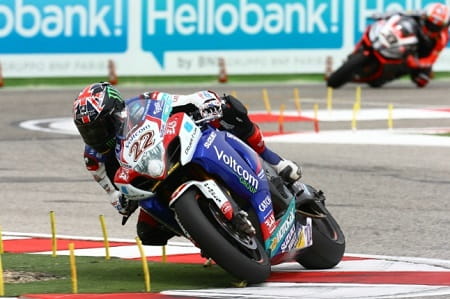 One man who perhaps knows his way around Donington better than anyone else on the grid is Leon Haslam. Having been involved with his Dad’s race school, Haslam reckons he’s completed what must be thousands of laps but the Derbyshire man has had a difficult few years and doesn’t seem to be out of the woods just yet. In his day, Haslam could blow the competition away at Donington Park but having not finished higher than fifth since 2012 it’d take a lot to see him at the top come Sunday. Maybe an outside bet for a podium, but a win may be a little too much to ask.

Of course, it’s not just the Brits who’ll be challenging at the front. Sylvain Guintoli is third in the title standings after another strong start to the season on the Aprilia RSV4. Having already taken twice as many wins as he had last season, he’ll be keen to get the results in at a circuit he enjoys. Tom Sykes’ Kawasaki team mate, Loris Baz will also be keen to impress. The Frenchman has had his best start to a season yet and will be looking to take his first win of the season on UK soil. Not forgetting Marco Melandri on the Aprilia, the Italian having had strong results at the circuit in the past. However he’s not quite gelled with the RSV4 so far this season, so it all depends on whether he can get the set-up right for the challenging track. 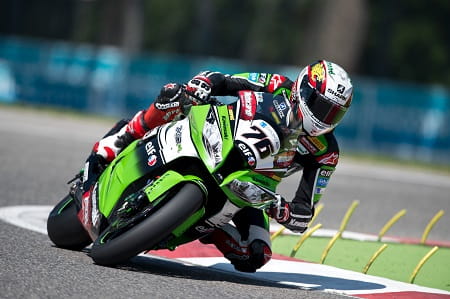 It’s not just at the top of the main class where Britain has a strong effort, Leon Camier and Christian Iddon will continue to fly the Union Flag in the EVO category. Camier will remain with the BMW Italia outfit, in place of the injured Sylvain Barrier, and currently sits third in the EVO championship having taken the double victory last time out in Imola. Christian Iddon and the Alstare Bimota squad have shaken the Superbike nest a little since joining the grid on Aragon. A brand new bike with little testing is running towards the front of the EVO field. Iddon has taken a few strong results and his team mate, Badovini actually crossed the line as the first EVO bike in Imola although the squad are yet to be allowed to score points as the Bimota factory hasn’t produced enough of the BMW-powered BB3 race bikes to be officially homologated.

Kev Coghlan will continue to fly the flag in the Supersport class, the Scotsman currently fifth in the title chase after a strong start to the season. He’s still looking for his first victory in the class, but if Brits on Yamaha R6s in the past is anything to go by, it won’t be long.