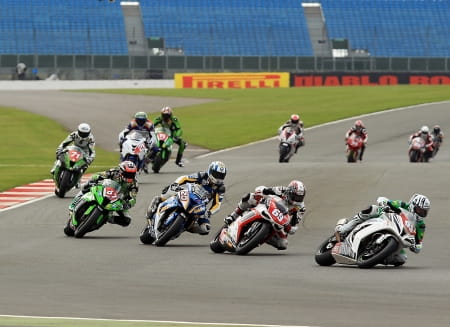 With the WSBK season underway and the second round at Aragon, Spain, on the horizon, we take a closer look at some of the main rule changes that have been put into place this year.

Three riders make up a row on the grid
Instead of the usual four riders forming the rows on the grid, competition is even fiercer as riders are vying for just three places on each row – just like in MotoGP.

Tyre changes are allowed during races
As we all know, last year’s WSBK Championship was blighted by unpredictable weather conditions – heavy rain in particular meant that the majority of weekends featured a red flag. From this season onwards, riders will be allowed to enter the pits to change their tyres and make adjustments, which means that:

Pit stops have been introduced
Don’t worry the series isn’t going to turn into F1!  But riders are now able to enter the pits during the race to make adjustments or to change their tyres. To do this they must pull up in front of their designated garage, turn off the engine and dismount their bikes. Refuelling isn’t allowed – unlike in F1!

Only three mechanics, adorned with an official armband, are allowed to touch the motorcycle during the pit stop. These cannot be given any external help from the pit lane either, but the rider can get involved and help! Up to two electric or pneumatic power tools are allowed at a time.

Wheel size increase
The wheel size has increased from 16.5 inches in 2012 to 17 inches this year. Pirelli is still the sole designated tyre supplier for the 2013 season.

Headlights and rear lights
You’ll notice that the front of the Superbikes now feature stickers – sorry, plastic/metallic film – to represent headlights to show how close they are to their road going counterparts. Also, to increase safety the bikes must now be equipped with red rear lights so that in bad conditions they can be seen clearly.

As in all race series, the rules and regulations are an ongoing consideration and are constantly being reassessed throughout the season. There are also a number of technical regulations we haven’t mentioned, but hopefully our little cheat sheet will help you explain to your mates about why the riders are pulling into the pits during the race!

In a Championship won by just 0.5-of-a-point in 2012, the old phrase rules are there to be broken isn’t true in this case…

Here’s a pause for thought: Why do you think pit stops have been introduced – for the benefit of the TV scheduling, to stop another sponsor ‘Monza-gate’ or to make it better for the spectators to always be guaranteed to see a race… Discuss.