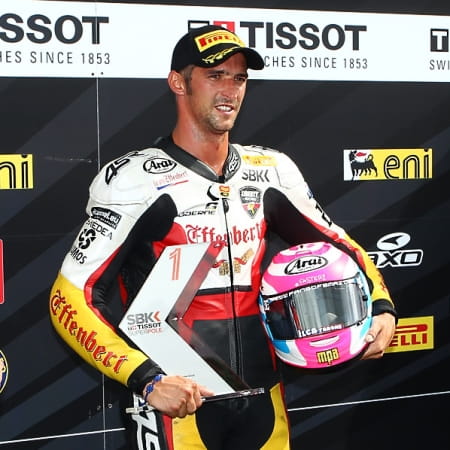 There has been one team in the 2012 Superbike World Championship paddock that has made quite an impression, and not just for its race results. At the start of the 2012 season, there were high hopes for Liberty Effenbert Ducati, with three riders who were also keen to make a name for themselves: Sylvain Guintoli; Maxime Berger; and Jakob Smrz..

In the team’s maiden victory, Sylvain Guintoli was stood on the top step of the podium at Assen, The Netherlands, but just five rounds later, he was left without a ride due to ‘disappointing results’. Subsequently, inboxes were inundated with a number of conflicting news reports, one citing a misunderstanding about contracts and then a note about the Guintoli’s results not being as good as expected.

On top of this, team organisers had criticised Infront for their handling of the Monza race cancellation in May, which was perhaps the turning point for the team as its main sponsor, Effenbert, apparently stopped its involvement because of this. However, it is important to remember that rider safety is more important than sponsors. The Liberty team then completely missed the Russian round held at the Moscow Raceway and was said to be focusing on the ‘reorganisation’ of the team for next year.

A return to racing was set for Nurburgring with news reports confirming Smrz and Berger as their planned riders for the round. However, Smrz arrived at the German track to be told (along with the attending press) that he was being dropped and replaced by Lorenzo Lanzi. It was yet another reorganisation of the team, at rather short notice…

So, onwards the team went with Lanzi and Berger until the next round where Berger was dropped due to an apparent ‘breach of contract’. He was the last standing rider who had been with the team since the beginning.

With just two rounds to go, it was thought Liberty would conclude the season with both Brett McCormick and Lanzi. However, both riders were then dropped just before the final round held at Magny Cours, which the team didn’t even attend. In Portimao, McCormick had been battling with championship leader and eventual championship winner Max Biaggi, demonstrating that he was actually capable of being up there with the best.

On a number of occasions, Liberty has indicated its intentions of running a team next season, however it is yet to be seen whether this will be a reality and it leaves us wondering – would anyone want to ride for them?