Victory for Melandri in Russia 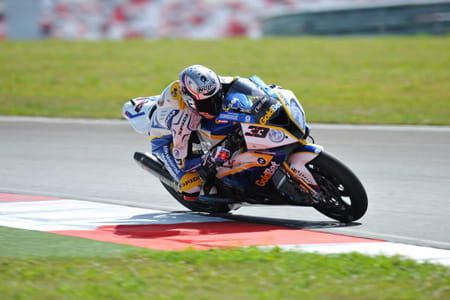 We knew from the weather forecast that the Russian round of the World Superbike Championship would be an interesting one and after a reasonably dry first two days, big black clouds surrounded Moscow Raceway as the first World Superbike race got underway on Sunday. With both the one-bike and flag-to-flag racing rules, organisers introduced pit stops to the superbike series for this year in which should the weather conditions in a race change, a rider can come in and have their tyres changed.

So far this season we have had either wet or dry races but teams knew the likelihood of rapidly changing conditions in Moscow and spent a large part of the weekend’s practice sessions rehearsing the 50-second procedure.

BMW’s Chaz Davies got an excellent start to the race in the dry followed by Davide Giugliano. Giugliano fell on the second lap leaving Davies with an early two-second lead. With the Welshman lapping three tenths faster than anyone, if the race were to remain dry it seemed he could be unbeatable. However this was not to be, as on lap six the rain came and the biggest problem was it was only raining on half the circuit.

Riders continued on their slick tyres with Davies out front followed by his team-mate, Marco Melandri. Even in the mixed conditions, the BMWs were significantly faster than the rest of the pack and started to build a gap. Suzuki’s Leon Camier and Red Devils Aprilia Michel Fabrizio took an early gamble on moving to wets, but the rain had stopped within a few laps and by this point, Chaz had a lead of around seven seconds on Marco who was still nine seconds ahead of anyone else. It was BMW’s race to lose.

On lap 19, the heavens opened and the rain was torrential. After attempting to manage it for a lap, Davies was the first into the pits followed by every other rider on slicks with the exception of Loris Baz. A small issue in the pit lane saw Davies lose out a few seconds to Melandri, who passed him the following lap to take the race win.

Crashes from Eugene Laverty and Leon Haslam saw Jonathan Rea and speedy Ayrton Badovini on the Panigale 1199 fighting for the podium – but the Italian came out on top to take Ducati’s first podium of the year. Melandri’s win elevates him to third in the championship.

Championship leader, Tom Sykes was an early casualty in the race as he pulled off with a technical problem. The frustrated Kawasaki rider revved his ZX10R in frustration only to end up blowing up his engine.

However the day’s events were cut short following a tragic accident in the Supersport race. Andrea Antonelli fell from his Kawasaki and was struck by another rider on the back straight. Race organisers subsequently cancelled the remainder of the weekend out of respect.