Sykes: "This championship is the answer to my critics" 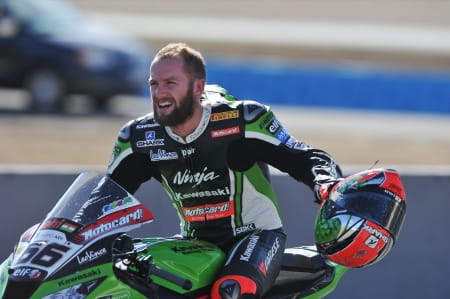 Tom Sykes became the first Brit to win the World Superbike Championship in six years last weekend at Jerez as he crossed the line in the first race in third place to put himself far enough ahead of Aprilia’s Eugene Laverty to not be beaten in the second race.

Here’s how it went in his words:

How does it feel to be World Champion?

Last week I was doing some work at home and I remember sort of dreaming about the possibility of becoming World Champion at Jerez. In those moments, I was getting goosebumps and the feeling was incredible. When I crossed the chequered flag in race one, the feelings I had in the last week were perhaps 2% of what I felt. Going into turn one I was shaking so much I had to stop to enjoy the moment, it was so strange, I could hardly control my body. I’ve worked so hard since I started racing when I was fourteen to get to this moment. The feeling hasn’t sunk in entirely and tomorrow morning when I’m enjoying my breakfast and English tea, I’ll probably choke on my tea. In the next couple of days something is going to hit me about what I’ve achieved. This is a fantastic championship, very competitive and myself and Kawasaki have been able to do a great job. Even though it’s a small team, we’re very concentrated and it’s made it possible.

What was going through your mind during that first race?

I spoke with Marcel ahead of the race and we needed to deal with it as another race. I’ve had some very difficult years in my racing career and that in itself has made me mentally strong. Last year we saw that I came very close to the World Championship, half a point and it’s times like that where it is difficult. I was able to use that as a positive and this weekend I went one better, it wasn’t easy, Sylvain Guintoli was keeping me very honest and it’s times like the difficult years that make it more easy to deal with races like the first. In the last couple of laps I was trying to do the best job I could, the bike was working well. I had four warnings from the front tyre and that was three warnings too many! The circuit has been quite greasy this weekend and it’s been causing problems for many of the riders. It was always a fine line but in the end I was able to react to my pitboard as my team were doing a great job letting me know what was happening and we managed to make it happen.

Have you been calm this weekend? Nervous?

I’ve worked hard all my life to get here and I was happy to be in the situation where I was fighting for the title. I think I’d be more nervous if I wasn’t in the situation where I could have won the title. Myself, Marcel, the team, all the sponsors, we all pushed hard to have this opportunity so when the opportunity finally comes you cannot afford to mess it up. I was very calm, last night was a bit strange. Usually I sleep well apart from waking up at three o clock to empty the tank but last night I woke up twice, once to empty the tank and secondly with anticipation. Not nerves, but today was a big day and I woke up at seven and thought “that’s it, I’m motivated”. Normally I don’t wake up until forty minutes before warm up and keep Marcel on the edge of his seat! I woke up early today, watched MotoGP and realised not to take anything for granted. For sure we weren’t the fastest this weekend but like I said, we did our work in Magny Cours and that gave us the breathing space here this weekend. When you look at the timing sheets, Aprilia were top four in one session, it’s their test track. BMW also know round here very well.

Why do you have what it takes to win a World title when many other riders have failed to win the title despite years of trying?

I’ve got my head screwed on. I’m down to earth. I appreciate a good motorcycle while many riders think the grass is always greener on the other side. I think that’s bull. I’ve had a good upbringing and I appreciate this. I’ve been compared to other riders many times in the past who have come from different championships and I’ve always been the underdog that doesn’t get mentioned but I use negative comments to my advantage, if anything it gives me more motivation and more drive to beat those people. Even after our strong performance in Magny Cours, one rider said that I won because of the bike but it’s stuff like this that I use to my advantage. Perseverance with that type of attitude has paid off. There have been many critics of myself in recent years and I could easily say something back but this championship is the answer to my critics and it really tastes sweet.