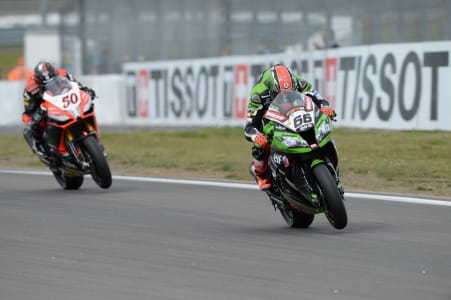 Tom Sykes has maintained the lead of the World Superbike Championship after Aprilia’s appeal following the incident in Monza was rejected by the FIM International Disciplinary Court.

Aprilia took issue after Sykes cut the second chicane at Monza, returning in the same position from which he left in. Aprilia’s argument was that Sykes held Guintoli up as he returned to the circuit in third.

An appeal by Guintoli saw Sykes stripped of third position, for it later to be re-instated following an appeal. Unhappy with this, Aprilia and Guintoli took the protest a stage higher, to the FIM International Disciplinary Court and now, four months later a decision has been revealed.

The International Disciplinary Court ruled that Sykes had not infringed any rule in the SBK rule book and therefore his third place stands with Guintoli fourth.

The decision means Sykes' championship lead is verified, he leads Guintoli by 1 point.

Round 11 of the World Superbike Championship from Istanbul continues tomorrow.