Sykes does the double at Magny-Cours! 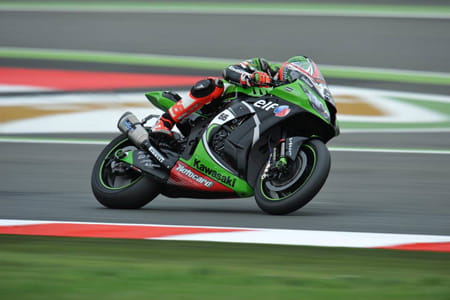 Brit Tom Sykes edged closer to the World Superbike Championship title this weekend at Magny-Cours, with superb victories in both races. The Kawasaki man now heads into the final round at Jerez in two weeks’ time with a 37-point advantage on second placed Eugene Laverty.

Although Sykes led the first race from start to finish, Sylvain Guintoli wasn’t going to make it an easy race for him. The Aprilia Racing Team rider stuck with him for much of the event, until Sykes was able to pull out a small 1.5-second margin at the front of the field. However, when the race was red flagged on lap 20, Sykes had done enough to secure the top spot, ahead of Guintoli and Laverty in second and third respectively.

In race two, Sykes demonstrated more of the same blistering pace – once again leading the pack from the off. However, this time it was Irishman Laverty who was hot on his heels, determined to score the maximum points to add to his championship tally and ensure he remained in reach of the crown.

At the chequered flag, Sykes had clinched his third double podium of the 2013 season, while Laverty was second and Guintoli third. The world series will now come to a dramatic finale in two weeks’ time, as the riders head to the Jerez showdown…  watch this space!