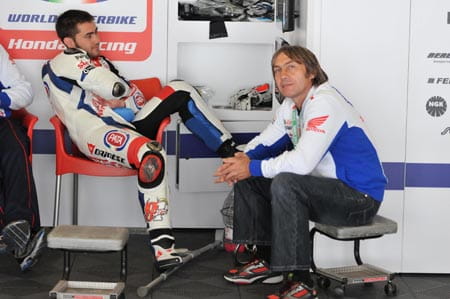 It was a day of mixed emotions for the Brit lads in World Superbikes yesterday. Taking his fifth pole position in a row, Kawasaki rider, Tom Sykes, topped the time sheets and took the best lap while fellow Brits, Leon Haslam and Leon Camier didn't make it to the final Superpole session.

Honda rider, Haslam, is still struggling with his broken leg following his big crash in Assen which saw him fracture both his tibia and fibula in his lower left leg. It is reported that it is hurting him more than it was when he attempted to ride at Donington Park just two weeks ago. He qualified in 14th place which puts him on the 5th row of the grid.

Alongside him is fellow Brit, Leon Camier, who suffered bad luck in the Superpole session after taking a gamble...which unfortunately didn't pay off. He was in 4th place with half the session still to go so returned to the garage and decided that he was safe to go through to Superpole 2. This wasn't the case and before Camier could get back out his time was beaten by team-mate Cluzel, Chaz Davies and Carlos Checa who pushed him out of progressing to the next stage.

Welshman Chaz Davies suffered bad luck too, he was out on his last qualifying tyre when the red flag came out due to rain on the track. This scuppered his chance of doing a fast lap on the tyre and in the 'final wet superpole' session of 20 minutes he managed to qualify 10th on the grid meaning he has some work to do today to get up to the front of the pack, after a crash in free practice yesterday afternoon and a bump to the head he will be a little battered and bruised today...

Tom Sykes proved once again that he was the 'King of Superpole' after putting himself in pole position for the 5th consecutive time this season. He was followed closely by Eugene Laverty who was just 0.001 behind him. Honda's Jonathan Rea rounds out the front row of the grid in 3rd place.

We predict some close racing if Superpole was anything to go by...