Laverty closes in at Laguna Seca 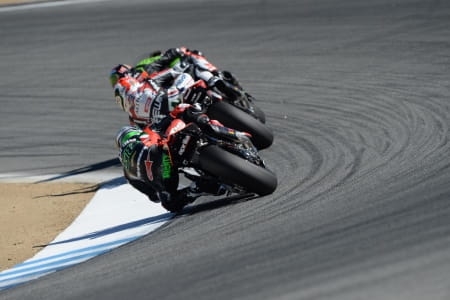 Whatever was going to happen at this past weekend’s World Superbike round at Laguna Seca was going to have massive implications for the championship; and it did. Tom Sykes increased his championship lead and at one point, it looked as though the Yorkshire grinner could have enough points to pull off a title victory at Magny Cours this weekend.

The first race was a comedy of errors, as it was split into three parts as the air fencing lining the circuit was punctured on two separate occasions by two separate American wildcards. In the first two parts, Sylvain Guintoli had put on an impressive display to take the lead – in the kind of manner you’d expect from someone competing for the championship despite not having had a win since the first round in February. In the third part, which turned out to be a 12-lap dash for the points, Guintoli didn’t hit the front once despite the top five battling throughout the race. Chaz Davies led for a large part of the twelve laps closely followed by his BMW team mate, Marco Melandri. However, Tom Sykes was on a mission. Knowing Davies was pretty much out of the title chase and Melandri with just a slim chance, last year’s runner up was keen to use the BMWs as a buffer to his title rivals. Sykes managed to get to the front and despite many attempts by those behind him; he clinched his sixth race win of the season. Eugene Laverty took third from Marco Melandri on the last lap at the corkscrew – in what would become a vital podium finish for the Irishman.

The second race managed to go full distance without interruption, although in many ways it was a race of two halves. In the first half, Tom Sykes fought to the front and controlled the race from Giugliano, Marco Melandri and Eugene Laverty. At the midway point, it looked as though Sykes was going to increase his title lead substantially with Laverty in fourth and Guintoli once again back in fifth. Having to past Melandri, with four laps to go Eugene Laverty made a move on Davide Giugliano for second place at turn four. He then pulled an identical manoeuvre on Tom Sykes with just over a lap to go. Losing the lead seemed to knock Sykes’ momentum; he then lost out to both Giugliano and Melandri to eventually finish fourth. Laverty didn’t have it easy though, Giugliano pushed him right until the final corner although the Althea Aprilia couldn’t quite get through on Laverty’s defensive line.

Laverty’s points haul elevated him to second in the title standings, ahead of team-mate Guintoli by just one point. Sykes lead now stands at twenty-three points with two rounds remaining. With Laverty not having been off the podium in the last five races, could an Aprilia steal another World title from Sykes and Kawasaki?