Haslam to help Honda’s stars of the future 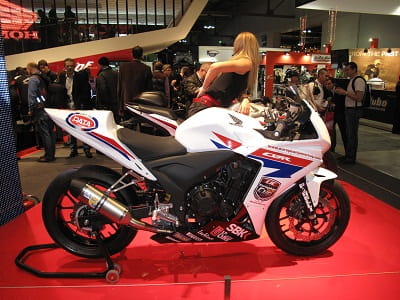 This is Honda’s cute-looking CBR500R race bike, the bike which the Japanese firm hopes will launch the careers of their next top-flight racers.

The new race-spec CBR500R, seen here at the Milan Show last month, will form part of the Honda European race cup that will run at eight selected rounds of World Superbikes for riders aged between 14 to 19 years old.

It's based on the Honda CBR500R road bike which Honda unveiled last month. The new bike is designed to fall neatly in line with the new A2-licence category and makes 47bhp.

Rumours suggest that now WSBK star Leon Haslam has signed to ride with the Honda World Superbike team in 2013, his dad, GP legend Ron Haslam, will play a big part in helping youngsters in the new race series.

The winner of the new Honda Junior Cup will win a Honda-backed ride in the World Superstock Championship in 2014.