From Scotland with love 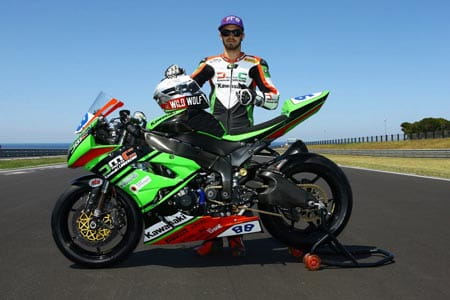 Twenty-four-year-old Kev Coghlan has raced motorcycles across the world and is showing no sign of slowing down as he is currently riding in the World Supersport Championship for the Kawasaki DMC-Lorenzi team. A former Spanish Supersport and European Supersport Champion, Kev is extremely competitive and recently scored his best result this season, fifth, at Monza.

Although he has competed in a variety of series on a number of different machines, the Scotsman is quick to explain that Supersport is close to his heart. “Supersport has always been my favourite,” he says. “I enjoyed competing in Moto2, but I didn't enjoy riding the bikes so much. It always seemed like I was working my way around a problem with the bike rather than just trying to go as fast as I could. However, I did enjoy the Superstock 1000 Cup as I got to ride the Ducati Panigale. It was my first year on a big bike and it was definitely a handful! I enjoyed fighting with it as it was always moving around.”

In 2012, Kev competed in the British Supersport Championship as well as the World Superstock 1000 Cup, but stopped his British campaign six rounds into the season. “I was just too busy last year,” he continues. “I might have been okay if I was riding two Supersport bikes, but because I was making the transition from a [Yamaha] R6 to a [Ducati] Panigale, I was trying to adjust my riding style for every race, so it didn't really work out.”

However, this actually proved to be a smart move for Kev, as his results picked up during the latter part of the year when his sole focus was riding the Panigale in the Superstock Cup. Some would say Kev was born to be busy – his current team is allied to the Russian DMC squad, giving him a few extra jobs on his to-do-list. “We have been doing a bit of track day instructing for the team,” he continues. “It's not as demanding as a race weekend but I really enjoy it!

“We're also starting the Russian Superbike Championship on 18-19 May, so we will see how we get on there. Hopefully it won't be as difficult as last year, as I won’t be jumping from one bike to another, but we will have to wait and see.”

Russia is seeing a dramatic growth in the popularity of motorcycle racing and with tracks such as Moscow Raceway being added to the WSBK calendar, the trend looks set to continue. “I think that Russia hasn't been hit so hard as Europe with the financial crisis and those with money can still afford to spend lots on coming to Europe for track days race as a hobby,” suggests Kev.” It's great that the championship is building up nicely over there as there as some great tracks too.

“Racing in Russia is a bit of a shock to the system, although it’s not like there is just one thing that stands out as being different in particular. It just seems like a different planet to me – it's not like anywhere I have ever been before – a different world.”

It's not rare for Kevin to visit a different country every week, but sleep isn't an issue for the young man. He's more bothered about getting out on his cycle instead! “The biggest thing for me at the minute is that I can't get enough training in between events,” he says. “I like to be in the gym five days a week and out on my push bike every day, but I just can't find the time. I have enough time to sleep and I eat healthy food so for me, the hardest bit of travelling so much is missing out on training.”

Some riders have their career paths mapped out, with exact ideas of what they want to have achieved and by when, but not Kev. He takes every day as it comes and is happy as long as he is on two wheels. “Going by the last three or four years, I have no idea where I want to be in a few years’ time,” he continues. “It seems like at the end of a year I pick up what I have and go with it. I would like to stay in the same championship with the same team so that we can build on what we have achieved. Obviously one of my main goals would be the World Superbike Championship though! Right now, I’m enjoying where I am and what I’m doing, which is great.

“My biggest racing idol is Ron Haslam. I worked with him when I was starting out in 125cc racing and he was helping us out with set-up. It's his level of understanding and his passion for bikes that I love and I have always looked up to him. Guys like [Valentino] Rossi and [Jorge] Lorenzo in MotoGP… well I can't really say enough about them! Marc Marquez is amazing as well. I spent some time with him when I was racing in the Spanish Championship as his brother was my team-mate. He’s a genuinely nice guy, really down to earth and he can ride a bike too!”