Brits on top - Sykes and Lowes lead the way! 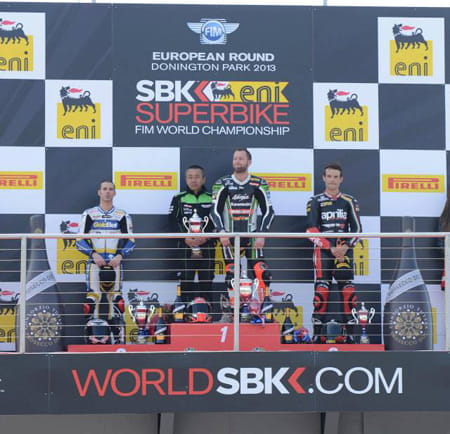 They dominated the races at Donington Park with Tom Sykes taking his career first WSBK double while Sam Lowes romped clear of the three times WSS Champion Kenan Sofuoglu to stretch his points lead to 30 in the title stakes.

Flash in the pan?  Home advantage paying handsome dividends and it will all change as the series move on?  Definitely not the case!

In both Sykes and Lowes we have two highly talented and professional riders working with highly motivated teams to ensure that they have the best equipment to pursue their title ideals and for Lowes the graduation into Superbikes next term.

Their prowess was clear to anyone at the Leicestershire circuit, the real pity being that there were not more paying spectators to savour the first all British winners clean sweep in the two series since way back in 1999 when one Carl Fogarty did the Superbike double and Iain Macpherson came out on top in Supersport.

Both Sykes and Lowes had shown consistent form in the build up to their home round, each having three pole starts under their belts, not forgetting strong race performances, with Sykes also fighting back from early season rib and wrist injuries.

They powered confidently into Donington despite the Friday rains with Sykes fastest, despite a tumble, and then maintained the pace to each set pole starts for their respective races and both made excellent use of them. Sykes hardly headed for more than a few yards in his races while Lowes had dealt with Florian Marino’s early charge by the time they reach the Melbourne Hairpin for the first time.

Lowes took his race victories by almost three seconds, then eight seconds, while Lowes enjoyed the loneliness of the long distance runner as he vanished eleven seconds into the distance.  Their challenges were left trailing and they admitted there was nothing they could do about it.

Marco Melandri who had chased Sykes home in the first race reflected: “It was a very difficult race and after coming through ahead of three riders it was too far for me to catch Sykes.”  And Guintoli said after his defeat in the second race: “Tom was really fast , he was on a different planet.”  And Sofuoglu admitted: “Sam was too fast to go with though there are more races to come where I will be stronger.”

Sofuoglu is correct in saying that, and his message is not lost on either Sykes or Lowes but they are determined to maintain their advantage.

Sykes is first to say of his rivals: “These guys are as fast as anyone but we have worked hard, taking a bit of criticism along the way, and now those works are showing and we are much stronger now at the end of the races knowing that the tyres will be with me at the end of the race – thanks to the team I am right in the mix, we’ve pulled in back and now can move on.”

And Lowes is ready for the challenges ahead: “Now we have to finish every race at the front or thereabouts and now I am believing going into races that I can do it.”

Portimao is the next stop on the 7th - 9th June in the unfolding battle for the crowns – back the Brits, they mean business.