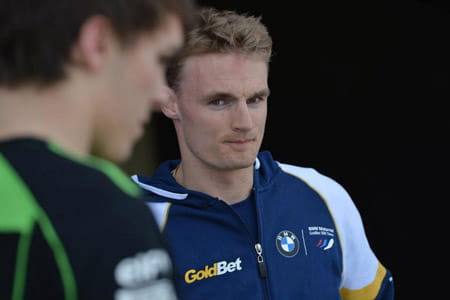 Welshman Chaz Davies has clinched a stunning double victory at the second round of the World Superbike Championship at Aragon, Spain this weekend.

After qualifying on the front row of the grid ahead of the 20-lap first race at the Motorland circuit, the BMW rider was embroiled in a three-way battle for the top-spot with fellow Brits Eugene Laverty and Tom Sykes. However, Laverty was forced to retire on lap four due to electrical problems, quickly followed by Sykes’ retirement the following lap, meaning Davies comfortably took the lead by almost a second from nearest rival Sylvain Guintoli.

By the 12th lap, Chaz's BMW team-mate Marco Melandri had closed in on the duo, while Jonathan Rea, who started the race from the third row of the grid, made his way valiantly through the field to finish race one in fourth.

Although it was initially Sykes who grabbed the holeshot in race two after Laverty crashed out of contention on the opening lap, a mistake on the second lap meant he dropped back behind the chasing Davies and Guintoli.

Boosted by his first race victory at the Spanish circuit, Davies continued to dominate the race, once again clinching victory at the chequered flag. Guintoli finished the race in second position, while Sykes, who managed to claw back some of the places he dropped earlier in the race, clinched the third step of the podium.