All to lose for Sykes at Jerez 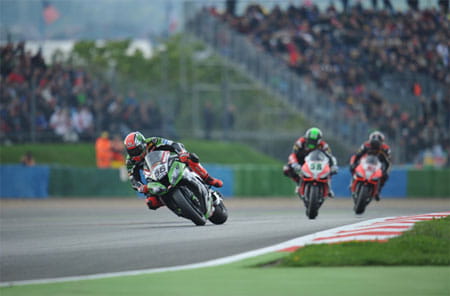 Last year, Tom Sykes went into the final round of the World Superbike championship with mere hopes of taking the title from Max Biaggi. He left having lost by just half a point. He’s made sure there’s little chance of that happening this year though, as he arrives at Jerez with a thirty-seven point advantage over his closest challenger, Eugene Laverty.

He’s taken nine victories this year, with six coming from dominant double victories at Donington, Imola and MagnyCours. To take the title in the first race at MagnyCours, Sykes needs to either beat Eugene Laverty and Sylvain Guintoli or finish less than twelve points behind them (that’s fourth should Laverty win).

Just one point separates the Aprilia pairing, who will need Sykes to have an awful first race to have any chance of retaining the title won by Max Biaggi for the Italian marque last year in the second race. Add into the mix that World Superbike hasn’t actually raced at Jerez before and things look a little interesting.

Unlike Laguna Seca and Istanbul which were also new for 2013, teams have had chance to test at Jerez with all major teams using the circuit for private tests too so experience shouldn’t interfere in the title fight.

It may well not be the case that it’s just Sykes and the Aprilias fighting at the front though, the Goldbet BMW riders have nothing to lose with the team pulling out next year and with Chaz Davies not signed up for 2014 yet, he certainly has a point to prove and he’s already won three races this year. Marco Melandri will be looking to sign out of BMW with victory and the team also have fresh faced Sylvain Barrier on board as a reward for winning the 2013 Superstock title for BMW. Barrier will be keen to prove himself having not sorted a ride for 2014 following BMW’s withdrawal from the Superbike series.

As we’ve seen at previous rounds this year, the satellite Aprilias of DavideGiugliano and Toni Elias can get themselves into the mix as can the Crescent Suzukis of Jules Cluzel and the returning Leon Camier. There’s every reason to believe the final World Superbike races could be some of the most explosive of the year, with a large possibility we’ll see the second British World Champion of 2013 crowned at the end of proceedings.