Waters: I'm hoping this is the confidence boost I need 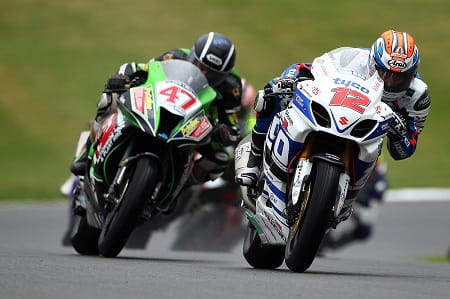 Josh Waters has said it is an ‘amazing feeling’ to have achieved his debut victory in the British Superbike Championship at Brands Hatch at the weekend and he hopes it will be the confidence boost he needs to make progress after a tough start to his British Superbike career.

The former Aussie champ commanded Sunday’s wet second race to win by a gap of almost five seconds. Waters has struggled since coming to the UK last year, losing his ride with Milwaukee Yamaha two thirds through last season. Moving to the Tyco Suzuki team for 2014, Waters has struggled to break into the top ten in the first five rounds with team mate, John Hopkins also having a hard time of it.

The victory marks not only his first win but also the first time he’s stepped on a British Superbike podium, with his best result prior to Sunday being a fourth place in similar conditions, also at Brands Hatch back in October.

“It’s unbelievable to have got my first win after the year I had last year. The start of this year hasn’t been easy either and nor has this weekend so to think that I would win the second race is an amazing feeling” said Waters. “I always used to go good in the wet in my seven years back home riding Suzukis and I was also riding around in the wet in Japan last week so maybe that’s helped.

“The Pirelli tyres are very different to anything I’ve ridden on before and it moves around a lot and I get scared so with five laps to go I was relieved to see I’d built a gap so I could maybe relax a little bit and when it came round to a couple of laps left I knew I had it in the bag. It’s going to be extremely hard but I’d love to be up in the top ten in the wet or dry.

“I’m hoping this is the confidence boost I need; I’ll keep trying my hardest. My aim is to be consistently in the top ten. In the dry we’ve been struggling with running into corners but I felt like I pushed the front harder in the wet than in the dry! I guess I didn’t have as much to lose as the others and could take a bit more risk but I enjoyed it.

“We’re heading out to Suzuka now and then it’s back to Thruxton, a circuit I like even though I crashed my brains out there last year! Hopefully we’ll be able to carry on this momentum.”